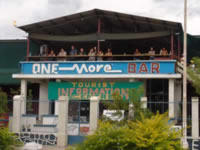 Barreto said many foreigners had been detained at bars and discotheques during the operations, due to misusing visas, adding that those detained people would be investigated by the police as whether they had breached the Immigration law.

The United Nations Police Commander Commissioner Luis Carilho said the UN Police would continue cooperating with the Immigration Police to control foreigners in the country, although the security responsibility had been handed over to the national immigration police recently.
at Friday, November 12, 2010