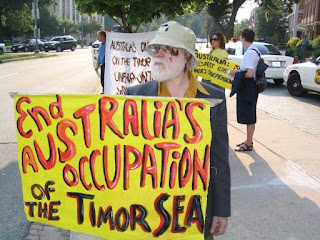 Dili, East Timor, 16 Nov 2010 – The East Timor government Wednesday is due to analyse the proposal to review its Oil Fund Law, which outlines where oil revenues may be invested, a source from the prime minister’s office said Monday in Dili.

Since the creation of the fund, in 2005 - despite only having revenues from a single field, Bayu-Undan, which is jointly explored with Australia – the rise in oil prices has provided East Timor with a significant fund of US$6.604 billion and no domestic or foreign debt.

The law, as it currently stands, requires that at least 60 percent of oil revenues be invested in US Treasury bonds, with a rating of AA or above, and an average maturity of less than six years and investment in other assets must be applied to foreign debt issues, with liquidity and transparency negotiated on highly-regulated financial markets.

As the five-years in which the Oil Fund Law could not be altered are now up, three major issues are being debated in relation to its review – the rise in the percentage that the government can withdraw from the Fund (currently just 3 percent), the possibility of the Timorese State accessing foreign funding, when through that route it can pay lower interest rates than those it receives from its financial applications, and finally, the diversification of its assets.

The first issue involves the government’s Strategic Development Plan, which outlines significant investments in infrastructure and creation of an industrial base that the country does not yet have.

The second issue relates to negotiations to receive loans from China, Japan and even Portugal, which announced the creation of a credit line for East Timor and the third issue is a question of diversifying assets.

Meanwhile the Timorese Banking Authority (ABP), the country’s future central bank, said in Dili that the Oil Fund had had a return of 1.62 percent in the third quarter, and its current value stood at US$6.604 billion.

The Oil Fund Law specifies that the ABP is the agent responsible for the operational management of the Fund and the Finance Ministry is responsible for defining the Fund’s overal investment strategy. (macauhub)