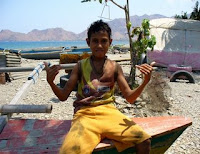 
The Council of Ministers held a meeting on Wednesday, 4th March 2009 at its meeting room, in Government Palace and has endorsed:

1 - Government Resolution which approves the Appointment of an Especial Representative for Guinea-Bissau.

Taking into account the lately and tragic attacks happened in Guiné-Bissau, which became the deceased victims the President of the same Republic, Nino Vieira, and the Chief of the Staff for the Army Forces, General Tagné Na Waié, the Democratic Republic of Timor-Leste has intended to demonstrate his solidarity with the same Country. Through this point of view, and regarding to its experience, Timor-Leste has jointed himself to another State Members, both nationals and internationals, through endeavor for the politic and institutional normalization of the country, as to restore peace and stability, it is, therefore un urgent necessity to improve all means for the dialogue and reconciliation.

In this way, the Government has decided to assist through financial support and to provide technical assistance for Presidential Elections (which will be held soon) and to appoint Dr. Mari Bim Amude Alkatiri as the especial representative, on behalf of the State of Timor-Leste, for studying along with the Guinese Authorities, and in coordination with CPLP, the viability of technical support to the reconciliation and stability process of the country.

The endorsement of new Organic Law for the Ministry of Justice, through the Decree-Law no. 12/2008, which regulates the competences that might be assumed by the Judiciary Training Center, the implementation and the management of the activities for the professional training and investigation in judiciary area. The article 20.o of the same Organic Law determines that the organic structures under the administrative supervision and technical autonomy of the Ministry of the Justice are regulated by the Ministerial Diploma to be approved by the Minister of Justice.
Thus, for approving the Ministerial Diploma which enclosed the Organic Structure of the Judiciary Training Center, the actual regime in force has to be revoked. Thus, for the endorsement of the Ministerial Diploma of which includes the Organic Structure of the Judiciary Training Center, there becomes necessary to repeals the recent law in force. The aforesaid repeal should be made through the present proposed Decree-Law.

The Council of the Ministers has also analyzed:

Through the presentation made by Dr. Hafiz Pasha, the expert adviser for the Policy of Macroeconomic and Development Assistance from UNDP, the Council of the Ministers has heard some suggestions, in order that Timor could be able to achieve the Millennium Development Goals. The objective of the visit by Dr. Pasha was among others, to recommend to the Government, Parliament and other national authors as well as the academics, in macroeconomic policy which can encourage the economy by giving assistance to the country in order to achieve the aforesaid objectives. The suggestions given with respect to the macroeconomic policy had passed for the use of the Petroleum/Gas Fund, for donations that can stimulate the domestic economy, create new jobs and also reduce the index of the poverty and for the measures of anti-corruption.

Dr. Pash did not leave to exactly praise the growth of the economy in Timor-Leste, in spite of the decreased fuel price, by pointing out that the Strategic Plan, which is important for the developing a marketing strategy for Timor-Leste, and the National Priorities for 2009 must be quickly developed.

Dr. Hafiz Pasha in his speech said that Timor-Leste is still making significant progress and he has suggested the support for private sector to be also increased.

4. Draft Basic Law for the Sport

In so far as the Sport is an expression of cultural identity of the community, it develops the human physic and psychical health allowing at the same time the pacification and social cohesion of Timorese community and as intended to acquire the proportional part in the statue of the high professional competition, the Government considers important the establishment of Sport Basic Laws.

This Draft Law will come to regulate the official and non-official performances, in the community and the institutions scopes, and the performance of high professional and non professional competition. The sport performances are regulated by national and international regulations and by every modality rules.