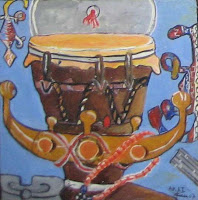 Ana Pessoa has asked to resign from Fretilin Radio Televisaun Timor Leste 18 March 2009 - Recently appointed Prosecutor General Ana Pessoa has sent an official letter to the Fretilin Central Committee asking to it suspend her from her position as a Fretilin MP in the Parliament and as a board member of the Fretilin.

Government to prioritise strategic decision in the national interest Radio Televisaun Timor Leste18 March 2009 - State Secretary for the Council of the Ministers, Hermenegildo Pereira, said that the Government would consider suggestions from all sides in making strategic decisions in the national interest as its top priority as far as they did not cause any conflict.

Image: Drum by an unknown artist of the Arte Moris School in Dili, East Timor