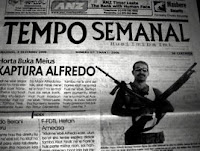 Australian Broadcasting Corporation Transcripts 5 March 2009 By Murray McLaughlin - KERRY O'BRIEN, PRESENTER: Here is a story about East Timor, where a newspaperman who was jailed for his resistance activity during the time of Indonesia's occupation is facing the prospect of being put back behind bars if he's found guilty of a charge of criminal defamation. The charge has been brought by East Timor's Justice Minister against Jose Belo, whose reported allegations of corruption against the minister in his newspaper 'Tempo Semanal', that translates in English as 'The Weekly Times'. Jose Belo has also worked from time to time for the ABC as a fixer and correspondent. There's growing international disquiet about the charges against him, especially as it's been brought under an old Indonesian criminal code which still prevails in East Timor. Murray McLaughlin reports.

MURRAY MCLAUGHLIN, REPORTER: A flotilla of freighters waiting in Dili Harbour to unload cargoes of rice is a tentative sign of East Timor's growing prosperity. Yet as this new nation struggles to consolidate, there's widespread disquiet about corruption in official quarters.

MURRAY MCLAUGHLIN: For the past two years, journalist Jose Belo has campaigned relentlessly against corruption in East Timor through the columns of his weekly newspaper 'Tempo Semanal'. A former resistance fighter, Belo was jailed and tortured several times during Indonesia's occupation of East Timor. During those times he was also a conduit for international news media.

WENDY BACON, JOURNALISM, UTS: Back then he would smuggle out videos, he made access for those journalists who went undercover, he helped get film out. He really - I think you could say that without Jose Belo, we would have known almost nothing about what was happening. Or we would have seen very few pictures of what was happening in East Timor.

MURRAY MCLAUGHLIN: Jose Belo's paper is a weekly, launched in October, 2006 and now boasting a circulation of 8,000. It's backed by the overseas aid agency of the Australian Council of Trade Unions and staff at Fairfax Media. The Fairfax program supports the paper's distribution in East Timor's remote districts and pays the staff of 12 a basic allowance of US$10.

JOSE BELO: I talk to my boys and my journalists here that, "Do this, because this is a challenge to the development of the country." And we are very much focussing on the investigation of the corruption, collusion, nepotism in these states.

MURRAY MCLAUGHLIN: Jose Belo used to be a prisoner at Dili's main jail. Now he's investigating the construction of a new security wall at the gaol. The job's worth more than US$1 million. Jose Belo's paper reported last year that the country's Justice Minister Lucia Lobato colluded with the contractor, who's a friend and fellow party member.

JOSE BELO: The allegation was that the minister has contacted, or there was exchanging text messages between the minister and the company that (inaudible) the tender before the official tender opened to the public, or invited the companies to come to bid for this tender.

MURRAY MCLAUGHLIN: Should a minister be dealing directly with businessmen who might be tendering for a project?

LUCIA LOBATO, EAST TIMOR JUSTICE MINISTER: No, we can provide - the project is mine. I can provide information to him about the time, when, where can they start, how can you submit the paper and so on. But this is not my decision.

MURRAY MCLAUGHLIN: Then there was the deal late last year worth more than US$3 million for the supply of diesel fuel to the main electricity generating station in Dili. Jose Belo published a leaked memorandum seeking a letter of credit from the Treasury to pay for the fuel in favour of a company-owned by the Justice Minister's husband.

JOSE BELO: It seems like (inaudible) government giving credit to a company, it set a precedent for these other companies. But more interesting here, this company related to a minister, to a minister, that is Minister of Justice husband's company. And while there was other companies offer more good price, very good conditions ...

LUCIA LOBATO: How can people say, the Australians say, that the minister there is a conflict of interest about the conflict interest because I am a Minister of Justice and my husband won the project. And I think it's irrelevant and nonsense. So, he was businessman before I took office. Secondly, there is a tender and my husband also submit for tender. And he won the project.

MURRAY MCLAUGHLIN: More disclosures about government contracts and the Minister of Justice ran over several issues of Tempo Semanal late last year. It all got too much for the Justice Minister. She charged Jose Belo with the crime of defamation under an old penal code still on the books from the time of Indonesian rule. Last December, Jose Belo had to submit to an investigation by the country's prosecutor general.

MURRAY MCLAUGHLIN: While Jose Belo waits for his day in court, the East Timorese Parliament has before it a new penal code which will likely to be enacted early in April. And under that new code, defamation will no longer be a crime.

You don't believe that defamation should be a crime?

LUCIA LOBATO: Do you ask me I believe or not?

LUCIA LOBATO: (Laughs). Why do you want to know my opinion about that?

MURRAY MCLAUGHLIN: Well, you are the Minister of Justice.

LUCIA LOBATO: Yes, I have explained to you and I say that in the new penal code, defamation is not a crime. So I prepared the draft.

MURRAY MCLAUGHLIN: So you believe that.

MURRAY MCLAUGHLIN: Why then, I ask you again, did you use the old code where defamation is a crime?

LUCIA LOBATO: Because that it is the law there, it's still there.

CHRISTOPHER SAMSON, LABEH - 'THE MIRROR FOR THE PEOPLE': Defamation law wasn't our law. That was Indonesian law which Suharto used at the time of the 24 years of occupation to suppress our people.

MURRAY MCLAUGHLIN: Christopher Samson heads up a private organisation funded partly by Australian aid money which campaigns against corruption. He fears that the access against Jose Belo is intimidating other news media in East Timor.

CHRISTOPHER SAMSON: Most other journalists will be very scared and are very scared. One, there is no organ that is supporting the journalists in this system. OK, for example, the Prime Minister hasn't said anything about the case.

MURRAY MCLAUGHLIN: The Prime Minister might not have, but East Timor's President Jose Ramos Horta has spoken out and given comfort to the country's journalists.

MURRAY MCLAUGHLIN: But in spite of that caution from on high, a jail sentence remains a possibility for Jose Belo, if he's found guilty of criminal defamation.