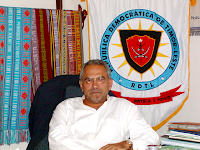 By Matt Crook DILI, Mar 13 (IPS) - East Timor President José Ramos-Horta’s comments that he may pardon those charged with last year’s firearm attacks on his person, and that of Prime Minister Xanana Gusmão, have alarmed observers who say that the credibility of the young country's legal system is at stake.

The President spent several weeks in hospital in Darwin after being shot twice in the attacks on Feb. 11, 2008.

On Feb. 27, this year, the public prosecutor filed a document with the Dili District Court indicting 28 people for the attacks.

Although Ramos-Horta has previously stated that he will wait for the trial process and that the case is in the hands of the courts, he also said, "I carry on nurturing unto [my attackers] total sympathy because I know they are just ordinary people caught amidst this whole tragedy set off by failure of the political leadership."

The comments have raised concern that Ramos-Horta may once again use his presidential powers to pardon criminals.

In May 2008, the President pardoned about 90 criminals, including convicted killer of nuns Jhoni Marques and former member of the Revolutionary Front for an Independent East Timor (FRETILIN) Rogerio Lobato, who was serving seven years for manslaughter and illegally using firearms to disturb public order.

Lobato’s actions played a pivotal role in the outbreak of violence in 2006. At the time, Ramos-Horta told parliament that "to know how to forgive is a virtue that we need to cultivate in our hearts".

Wright added: "The exercise of the power to grant pardons by Ramos-Horta strains the effectiveness of the legal system and tears away at the judicial process and the decisions of the courts, which ought to be respected by all, including the President."

Luis de Oliveira Sampaio, executive director of non-governmental organization Judicial System Monitoring Programme, said, "The process really implicates our legal system because people aren’t confident with it. They know that even though cases go to court and jail that our members of state can release them without any analysis or consultation with other sides."

Some of those pardoned in 2008 had played a role in East Timor’s struggle for independence against Indonesia’s 24-year illegal occupation. They were freed despite standing convicted of numerous human rights offences.

Reinado was shot dead in the president’s compound during the Feb. 11 attacks. Meanwhile, Pires’ exact role in the attacks remains unclear. Ramos-Horta has said that he blames Pires for the failure of talks between the president and the rebels.

However, last year, the President told Australian Broadcasting Corporation that Pires was not "materially involved" in the attacks.

For more than one year, Pires has been prevented from leaving East Timor to return to her home in Darwin. Her passports were confiscated after investigations were carried out to determine if she influenced Reinado to orchestrate the Feb. 11 attacks.

Pires is also alleged to have given Reinado a "type of cigarette" that made him "fearless" and to have told the rebel leader that if he died she would put a bottle of vodka in his grave.

Although there is confusion surrounding the evidence for the charges, Minister of Justice Lúcia Lobato is backing East Timor’s legal system. She said, "Let the court decide. Let the national institutions decide on the case. We have the court, we have the prosecution unit, we have the lawyers. This is the mechanism we should follow – it is the law."

Prosecutor General Longuinhos Monteiro told IPS that evidence-gathering for the charges of all 28 suspects should be completed in about two months.

There is, however, concern at the lack of information readily available about the charges that have been levelled against the 28, including key ballistic evidence that has yet to be presented to the court.

Member of Parliament Ana Pessoa will take over the role of prosecutor general after Monteiro is sworn in as commander of East Timor’s police force on Mar. 27.

"I myself question why we were not receiving any information regarding the ongoing investigation,’’ Pessoa said. ‘’The public needs to know what is going on. There are certain details that are not supposed to be revealed to the public, but you should inform the pubic how things are," she said.