Inan Ida - An image of Timorese unity and oneness 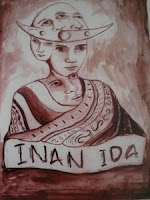 ETLJB SYDNEY 3 March 2009 - During the 2006 crisis in East Timor, which was the most unstable period in the country's post-independence history, one powerful image of East Timorese unity emerged.

It is entitled "Inan Ida" which translates into English as "One Mother". The artist is not known.

As the new state has sought to create its national identity, iconography of unity and oneness are cogent devices in the construction of that identity that is moving away from an anguished bloody past.

Unfortunately, the supreme sovereign organ of the state, the National Parliament, amended the country's first state arms - which already included weapons of violence (swords) - and replaced that image with yet other images of a weapon of violence - an AK47 gun and a bow and arrow - rather than one of national unity . 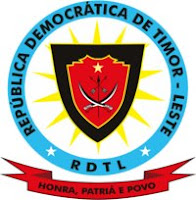 Since violence has been a chronic and devastating force in East Timor for so long, it is bewildering why images of violence are incorporated into the state's contemporary identity when there are such compelling images of unity as "Inan Ida" is. The gun has been a principle means of the perpetration of that violence. The bow and arrow are reminiscent of the deadly "rama ambon" that was deployed througout the 2006 crisis and beyond.

As long as the state endorses images of the means of violence as meaningful components of the state identity, what chance can there be of peacefulness and harmony forming bonds of coherence and national fraternity between the citizens and establishing a benign state and state agencies whose primary objective is the welfare of the population and not their own political goals?

As long as images of the means of violence are perpetuated through the symbolism of the state, what hope can there be of the propagation of the foundations of a civil society based on the rule of law rather than violence and conflict which has endured into the so-called era of freedom in East Timor?