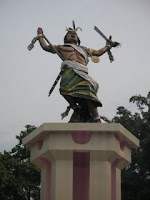 JSMP: Hearing adjourned because of indications that the judge and victim were related 9 March 09 DILI - On 24 February 2009 the Dili District Court adjourned a hearing into a case involving light maltreatment committed by the defendant JF against the victim CB. The hearing was adjourned immediately after the judge declared the hearing of Case No. 34/Crm.S/TDD/2008 open to the public and the contents of the indictment were read out by the public prosecutor. The public defender providing representation to the defendant requested for the single judge (Constancio Basmeri) to suspend and adjourn the hearing because of indications that the victim and the presiding judge were related.

The judge also asked the public defender about the grounds and legal basis that could be used to adjourn the matter. The judge believed that there is no legal basis to allow the court to adjourn such a matter without valid evidence to indicate that such an adjournment was necessary.

The judge continued by explaining that a case could only be adjourned based on a number of specific reasons, such as: the defendant, victim or witness did not attend the court after written notifications had been issued. In cases before a panel of judges, the case could only be adjourned if one of the judges or court actors was absent. These are the factors that the court can consider when deciding if a case needs to be adjourned.

In the present matter the hearing should have continued without being adjourned. If there were indications that the judge or other court actor was related to one of the parties then the matter could only be contested upon the final presentation of charges. A request for corrective action can be submitted to the court of appeal to issue a decision on the status of other court actors.

JSMP believes that the case should have been contested before the trial begun, meaning that the judge in question could take a stance on the matter and declare any familial relationship. Article 39 of the Criminal Procedure Code mentions “related by blood up to the third degree”. Therefore having similar surnames or being fellow residents of the same village are not grounds included in the definitions provided for in Article 39 of the Criminal Procedure Code. Therefore the aforementioned adjournment did not need to happen due to a lack of a valid legal argument.

The grounds presented by the public defender to the judge were based on claims made by the family of the defendant who stated that they had knowledge that the judge was related to the victim. However the public defender could not provide a legal argument or present legal grounds in accordance with the provisions of Article 39 of the Criminal Procedure Code.

JSMP believes that court actors should perform their duties and functions in accordance with the law. Solid legal arguments should be presented before any issue in a proceeding is contested.

Image added by ETLJB: The Indonesian "Independence" monument in Dili.
at Wednesday, March 11, 2009