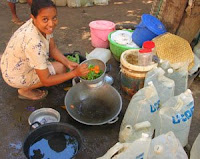 DILI, 23 March 2009 (IRIN) - Residents of the last remaining camp for the internally displaced (IDPs) will have to wait a little longer to go home after the tentative return date of 12 March was pushed back.

In April 2006, disaffected army troops clashed with pro-government troops in Dili, triggering violence that forced up to 150,000 people to seek refuge in IDP camps across the country.

Most have returned home, but for the 9,000-plus still living in Metinaro camp in the east of Dili, the capital, the wait is not over.

A delay in verifying the state of the IDPs' houses and thus determining how much money they are entitled to as part of a resettlement package of up to US$4,500 means the government will have to set a new return date.

The government has closed Dili's more than 50 IDP camps one by one, with Metinaro one of the last on the list. The Ministry of Social Solidarity (MSS) has been assessing the condition of each family's home.

Luis Esteves, site liaison support for the International Organization for Migration (IOM), said: "Each family needs to go to their house and then [the MSS] needs to [verify that] it belongs to them."

Amandio Freitas, MSS director for social assistance, said that while they have been living in the camp, many of the IDPs' houses have been taken over. Sometimes there are claims of ownership of land from multiple parties, he added.

"The IDPs might agree to give money to the occupants from the package they receive. Sometimes the IDPs won't give any money and the occupants won't leave. We then have to ask the police to remove the occupants," he said.

Several agencies have been working at Metinaro.
at Tuesday, March 24, 2009