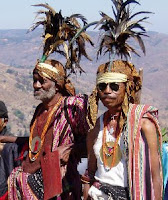 DILI 5 March 2009 Ministry of Justice and UNDP organize consultation workshop on customary law and local justice - On 27 February, the Ministry of Justice, jointly with UNDP Justice System Programme and with the support of UNMIT (United Nations Integrated Mission in Timor-Leste), carried out in Dili a workshop on access to justice and customary law with the attendance of more than 100 participants from organizations related to Human Rights, and the justice sector. This workshop comes as a series of consultations oriented to develop draft legislation on customary law and local justice.

Timor-Leste is young country which reached its independence in May 2002. As other post-conflict countries, it is developing its path to consolidate its judiciary institutions. On the other hand, there is an extended practice of customary institutions which precede the State. One of the nation's challenges is to provide access to justice to all its citizens by accommodating these traditional mechanisms with the formal justice system.

To respond to this challenge, the Ministry of Justice, with the technical support of UNDP Justice System Programme, has launched a process of consultation through decentralized workshops in the districts (Baucau, Oecusse) and sector consultations in Dili, addressed to Human Rights NGOs, women's organizations, and justice operators. In these workshops the participants have the opportunity to discuss the problems they face, to evaluate channels for conflict resolution and make proposals to improve the access to justice at local level.

"Access to justice is a human right and essential element of a democratic society and rule of law which contributes to peace and stability. It means the capacity to have efficient mechanisms for conflict resolution, protection of rights and control the abuse of power", said Ms. Raquel Yrigoyen Fajardo, UNDP consultant on Access to Justice.

The courts are indispensable for guaranteeing the protection of human rights and the necessary check and balances in a democratic society. Complementary to the formal justice system, the recognition of conflict resolution mechanisms based on customary law can be an important factor to enhance access to justice, especially for facing daily life conflicts at local level.

The next consultation workshops will take place in Los Palos, Suai and Dili in March/April followed by a national workshop in June 2009. http://92.39.118.48/justice/index.php?mod=newsarchive&id=109
-----
Image added by ETLJB: East Timorese lulik men.
-----
ETLJB Comment: Customary law in East Timor is undemocratic, invokes the supernatural as a basis for decision-making, discriminates against women and children, admits accusations of the impossible crime of witchcraft and condones torture as a punishment. It is susceptible to further perversions of justice through the influence of feudalistic social power structures.

Customary law belongs in the past and should not be advanced of a means of resolving social conflicts. Rather, the law should be based on the Constitution, enacted by the elected law-makers in the Parliament and other state law-making institutions, administered by the police force and enforced by the courts. This is where the energies of the Justice Ministry and UNDP should be focused - rectifying the judicial system, reforming the security forces, strengthening the Parliament and civil society law and justice organisations and socialising the positive laws of the new State as the only legitimate source of legal authority.

This is the path which East Timor must follow if democracy based on the rule of law is the defining objective of the nation. The reversion to pre-democratic forms of law and justice is draconion and will suppress the process of the construction of a modern liberal welfare state. It will entrench undemocratic institutions and hinder the economic, social and political advancement of East Timor.

See also the Speech by the then President of East Timor, Xanana Gusmao On the occasion of the International Conference on Traditional Conflict Resolution & Traditional Justice in Timor-Leste
at Friday, March 06, 2009