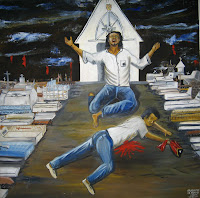 East Timor Legal News 13/11/2011 Source: Amnesty International 12 November 2011 Index: ASA 57/004/2011 - Amnesty International calls on the governments of Timor-Leste and Indonesia to provide justice for the victims of the Santa Cruz massacre which took place 20 years ago in Dili, the capital. On the morning of 12 November 1991 the Indonesian security forces violently suppressed a peaceful procession of some 3,000 Timorese people to the Santa Cruz cemetery in Dili.

Both governments must investigate and bring to justice all those responsible for unlawful killings, enforced disappearances, excessive use of force and other human rights violations during the peaceful demonstration.

The continued failure – twenty years later – to hold all the perpetrators to account highlights a wider problem of impunity for crimes under international law and other human rights violations committed during the Indonesian occupation of Timor-Leste (then East Timor) between 1975 and 1999.

Many of the Timorese had attended an early morning memorial for Sebastião Gomes Rangel, who had reportedly been killed by Indonesian security forces on 28 October 1991. As the procession made its way to the cemetery, pro-independence banners and flags were raised. Minutes after the crowd arrived at the cemetery, the security forces opened fire. No warning was given.

According to eyewitness accounts obtained by Amnesty International immediately after the massacre, some soldiers fired into the air but others levelled their weapons at the crowd. The cemetery walls and the large crowd made it difficult to escape, but the shooting continued even as people tried to flee. Some were believed to have been shot in the back while running away. Many of the demonstrators were shot and killed, or otherwise injured. Hundreds of people were said to have been badly injured during the incident.

In a report released in 1994, the UN Special Rapporteur on extrajudicial, summary or arbitrary executions found that members of the Indonesian military were responsible for killings during the event and that the response was “a planned military operation designed to deal with a public expression of political dissent in a way not in accordance with international human rights standards”.

The precise numbers of those killed, disappeared and injured during the massacre and in the immediate aftermath remains unknown, although it is estimated that over 200 people were killed or disappeared and around 400 wounded. Two decades later, calls for justice have yet to be fulfilled and attempts to hold the perpetrators to account have been weak.

In 2001, the Timorese government set up the Commission for Reception, Truth and Reconciliation in East Timor (Comissao de Acolhimento, Verdade e Reconciliacao, CAVR), mandated to inquire into and establish the truth regarding human rights violations which occurred between 1974 and 1999. In 2005 the Commission published its report, which recommended the investigation and prosecution of those suspected of serious crimes under international law committed from 1975-1999, including the Santa Cruz massacre. According to the Commission, despite evidence of the direct involvement of 72 military officers, to date only 10 have been tried and sentenced by military courts to between eight and 18 months’ imprisonment. The Commission further recommended steps to establish the whereabouts and fate of the disappeared and reparation for victims.

Amnesty International urges the Timorese and Indonesian authorities to initiate promptly an independent, impartial and effective investigation into the events at the Santa Cruz cemetery on 12 November 1991. This investigation should be within the framework of a wider investigation into serious crimes committed during 1975-1999. The Timorese and Indonesian authorities should also bring the perpetrators to justice in fair trials without the death penalty and ensure that victims receive full reparation.

The vast majority of those accused of human rights violations are believed to have been given safe haven in Indonesia, and Amnesty International urges the Indonesian authorities to co-operate fully with investigations and prosecutions of persons accused of crimes in Timor-Leste between 1975 and 1999, including by entering into extradition and mutual legal assistance agreements with Timor-Leste.

In 2005, a UN Commission of Experts recommended that the Security Council adopt a resolution under Chapter VII of the UN Charter to create an ad hoc international criminal tribunal for Timor-Leste if genuine steps have not been taken towards holding to account those responsible for crimes against humanity and war crimes in Timor-Leste. Six years later, such steps have still not been taken.

Amnesty International further calls on the Government of Timor-Leste to implement the recommendation of the CAVR to establish a public register of missing persons and those killed between 1975 and 1999 and to undertake jointly with the Indonesian government a systematic inquiry to establish the whereabouts and fate of those who went missing.

Amnesty International also calls on the Timor-Leste and Indonesian governments to ratify the International Convention for the Protection of All Persons from Enforced Disappearance at the earliest opportunity, incorporate its provisions into domestic law, and implement it in policy and practice.
at Sunday, November 13, 2011