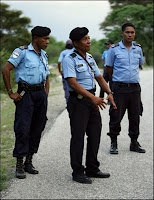 6 Oct 2008 8:53 PM AAP - Police in East Timor have been ordered to set up checkpoints and step up patrols to stop officers from taking weapons home, amid signs of mounting tensions in the force.

Police have been ordered to search cars for illegal weapons, with one aim of the operation to stop police from unlawfully taking their weapons home when they finish work.

The order follows the circulation of an inflammatory leaflet pointing to a flare-up of regional tensions among police, similar to the rift among armed forces that sparked deadly violence two years ago.

East Timor was torn apart in 2006 when east-west tensions sparked deep divisions in the armed forces and ultimately triggered violence that left at least 37 people dead and around 150,000 displaced.

The leaflet warns of action "against the government" if someone from the east is appointed as East Timor's permanent police commander.

Interim police commander Afonso de Jesus today said police had been ordered to make sure officers were not taking their weapons home.

"One regulation (we have is) when police cease their duty their firearms are supposed to be put in the armory," de Jesus said.

"But some go home and take their weapons home with them."

An operational order issued to police calls for a checkpoint to be set up close to the residence of the State Secretary for Security, who is charged with appointing the new police commander.

UN police last week said they were taking the emergence of the leaflet seriously and trying to confirm its source.

"As we have seen before, if this sense of discrimination and resentment is left to fester it can cause serious problems down the track," said ICG analyst in East Timor Anna Powles.

There are other signs of problems within the police force.

Members of the Task Force Unit recently threatened to strike over a pay dispute, leading to a heated confrontation at police headquarters.

And the Prosecutor-General Longuinhos Monteiro last week revealed that de Jesus, the interim police commander, was being questioned in relation to disciplinary issues.