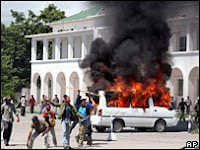 The 18-paged document presents a scan of a report by the United Nations Mission of Support in East Timor (UNMISET) titled "Executive summary of investigations of police response to the riots on 4 December 2002".

According to the table of contents the report consists of 3 sections:

1. a Cover letter from Mr. Kamalesh Sharma, Special Representative of the Secretary General for Timor-Leste, to H.E. Dr. Mari B. Alkatiri, Prime Minister of the Democratic Republic of Timor-Leste

2. an Executive summary of investigations of police response to the riots on 4 December 2002

The Annex section as well as eventually a part of the executive summary are missing from he scans.

The report as well as the letter are dated 14th of November 2003.

Click this link to read the document.
at Wednesday, October 01, 2008