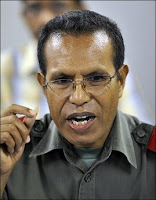 Dili, Oct 1 (Lusa) - The weapons transfer case, in respect of which the third inquiry was held in the captial city Dili on Thursday, is the latest 'wonder' of the 2006 Crisis for the country's fragile stability .

The Attorney General's Office called Thursday for the interrogation of Colonel Falur Rate Laek, after yesterday's questioning of Colonel Lere Anan Timor, and Major Mau Buti. These three officers are senior members of the General Staff of the Falintil-Defence Force of East Timor (F-FDTL) and masters of the historical Timorese resistance.

The PGR also intends to call to justice the head of the General Staff of the Armed Forces (CHODs) East Timor, Brigadier-General Taur Matan Ruak, and former Defense Minister Roque Rodrigues, who are members of the Supreme Council of National Security and Defense.

At the root of the case is the distribution of weapons to civilians by F-FDTL on 24 May 2006. This episode happened after four weeks of instability triggered by the so-called F-FDTL petitioners, from 28 April of that year.

The implosion of the National Police (PNTL), the desertion of Major Alfredo Reinado, commander of the Military Police, the existence of the group of Vincent Conceicao 'Railos', armed by the then Interior Minister of East Timor, Rogerio Lobato, and incidents like the attack on residence of Taur Matan Ruak were analyzed by the UN Independent Special Commission of Inquiry (COI). The UN COI, which presented its final report in October 2006, concluded that "the civilian arm, the Defense Minister and the head of the UN Protection Force Defense acted without legal basis and created a situation of significant potential danger. "

'On 17 May, Brigadier-General Taur Matan Ruak wrote to Prime Minister (Mari Alkatiri) requesting an audit of the deposit of weapons of F-FDTL in response to allegations that civilians have been seen people walking around withF-FDTL guns,' recalls the report of the COI.

The evidence before the Commission establishes that the F-FDTL began to arm civilians on 24 May 2006. This was done under orders of Brigadier-General Matan Ruak and with the knowledge of the Minister of Defence, says the document. We made lists containing names and corresponding serial numbers of weapons delivered, but people have not signed for the weapons, the Commission found.

The Commission noted its concern at the level of illegal and irregular distribution of weapons in East Timor and the inertia shown by the Government to tackle the lack of control of arms within their armed forces and reliable information and analysis regarding the illegality and or irregularity in the possession of weapons, their handling and use.

The COI concluded that "the weapons were distributed with the knowledge and approval of the following persons: Roque Rodrigues, Taur Matan Ruak, Tito da Costa Christopher, aka Lere Anan Timor, Manuel Freitas, aka Mau Buti, and Raul Domingos, aka Laek Falur Rate "(sic).

The Commission recommended that these people be prosecuted for the illegal transfer of armas.

The International Crisis Group, which examined the crisis in a report that preceded the COI, said, 'in contrast to the secret and illegal transfer of weapons to civilian police , This (the F-FDTL) was relatively orderly and well documented, making it easier to collect the weapons after the arrival of international troops.'


Image: Brigadier General Taur Matan Ruak, Chief of the Falintil-East Timor Defence Force - Yet to face trial for participation in the 2006 illegal weapons transfer case more than 2 years after the United Nations Commission of Inquiry recommended that he be prosecuted.
at Sunday, October 05, 2008