Fears for law and order in East Timor 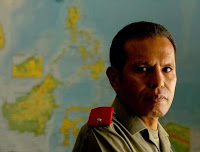 The Australian 3 October 2008 Paul Toohey - East Timor's fragile political and justice system is again being put to the test with the country's most senior military figure, Brigadier Taur Matan Ruak, facing possible prosecution over his role in arming civilians during the crisis of 2006.

Brigadier Ruak, who has been named as a suspect but not charged, has said he is happy to co-operate with the prosecutor-general's office once his current immunity status is lifted.

A UN commission of inquiry into the 2006 crisis recommended that Brigadier Ruak, his two colonels and others, including then defence minister Roque Rodriguez, be prosecuted for illegal weapons transfer.

The report found Brigadier Ruak, who upon East Timor's liberation in 1999 was leader of the Falantil armed resistance, began to distribute F-FDTL army weapons to 206 former freedom fighters and police from May 24, 2006.

Brigadier Ruak told the commission of inquiry that at the time rebels were moving on Dili and the F-FDTL did not have the capacity to respond. All the distributed weapons were logged and eventually returned.

Fretilin opposition party leader Mari Alkatiri has volunteered to act as Brigadier Ruak's lawyer if charges were ever laid.

But observers believe the brigadier, deeply popular in the east of the country, will never be prosecuted because it could reignite violent divisions between the army and police, and easterners and westerners.

Fretilin is angry that Prime Minister Xanana Gusmao's alliance majority has on three occasions used parliament to invoke immunity on behalf of former police commissioner Paolo Martins, who is also a member of Gusmao's CNRT party.

Martins was also named in the report for distributing weapons in 2006 and abandoning his command, but was not specifically recommended for prosecution.

'No member of this Government would ever again be able to travel past Metinaro - just east of Dili, where the army has its headquarters - if Matan Ruak is charged,' said a source in Dili.

'He has substantial support in the eastern districts and elsewhere. He is very, very highly respected. He was our last commander of Falantil and was in the fight for 24 years.

'All of us are subject to the rule of law, but you can't do this selectively. Let's have Paolo Martins turn up and be questioned.'

The issue of prosecuting the country's senior soldier is a very delicate one that will test the country's separation of powers. Timor has failed this test before, with its leaders known to intervene in the justice system in order to get what they believe is the best result.

Brigadier Ruak was responsible for sacking some 600 former western-born soldiers in early 2006 after they abandoned their posts to stage protests. It resulted in spot battles, street violence and a two-year rebel standoff.