Lack on quorum, Parliament fails to Reparations Law for victims 1975-1999 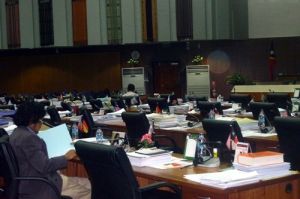 Tuesday, 24 April 2012 17:37 Written by Ezequiel Freitas,TDW - Even though the National Parliament in Dili has received the proposed Reparation Law draft for victims from 1975 until 1999, thus far, it has not been passed because a minimum quorum has not been able to be assembled to discuss the contents of the draft law.

“Last time here at the Parliament we said we would debate and approve the law. We have put it on the agenda several times but we never seem to have a quorum every time we want to discuss it,” said Francisco Branco, FRETILIN, last week (10/04) at the National Parliament, Dili.

According to him, it is not certain when the law will be approved but the draft law is ready to be debated.
Meanwhile MP Paul Martins, CNRT, said the Reparations Law is pending the national parliament because the issue of the veterans in Timor-Leste has not yet been adequately resolved.

“It will not be approved during our mandate, only in the next [legislature] mandate,” said MP Martins.
He added this is not a matter of the National Parliament not wanting to make it a priority but the veteran’s problem needs to be addressed first.
at Saturday, April 28, 2012