WARNING MACHINE TRANSLATION ORIGINAL REPORT CANBERRA - Australian media has disturbed Indonesia again with the disclosure of Australian confidential documents about the conflict in Timor Lesta in the past. The document said the Indonesian military planned to bomb East Timor with a napalm bomb.
The Australian and United States (US) governments, the document continued, knew the plan but they did not protest. The secret document was discovered by an Australian researcher, Professor Clinton Fernandes from the Australian Defense Force Academy.

Napalm bombs are one of the forbidden weapons commonly referred to as incendiary weapons. The research, claimed Fernandes has been going on for a long time to find out the extent of the Australian Government's knowledge of Indonesian war crimes in East Timor (which was then East Timor). 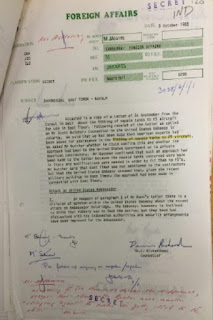 One of the documents found by Fernandes in the National Archives of Australia was the September 1983 document. The document contained a letter from the Australian Consul in Bali, Malcolm Mann, addressed to the Australian Embassy counselor in Jakarta Dennis Richardson. It contained, regarding his conversation with the US Consul in Surabaya, Jay McNaughton.
"America has told Mann that he has seen intelligence reports that, Indonesians are ready to use (bomb) napalm for tanks and F5 aircraft," said the secret document, as reported by the Sydney Morning Herald on Saturday (05/09/2015) .

Still according to the document, McNaughton explained that American experts had been asked to help install napalm bombs on Indonesian tanks because Indonesians had difficulties.
at Saturday, July 13, 2019