Crime of Manslaughter: One Year Imprisonment Suspended for Two Years 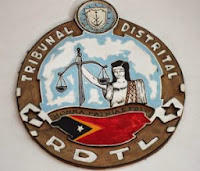 On 8 March 2019 the Baucau District Court conducted a hearing to announce its decision in a case of manslaughter involving the defendant Teofilio Pinto and the victim Lourenco Soares that allegedly occurred in Manatuto District.

Charges of the public prosecutor

The public prosecutor alleged that the defendant violated Article 140 of the Penal Code on manslaughter that carries a maximum penalty of 4 years in prison or a fine.

The witness Julia Soares, who is the victim's wife, testified that she was at home and the victim left to check on his buffalo. Suddenly she heard a vehicle strike the victim killing him instantly. When the witness and other families arrived at the scene they saw that the victim was already dead and his head was split open and broken hip. Meanwhile, the witness Filomena da Silva, who is the defendant's wife, chose the right to remain silent.