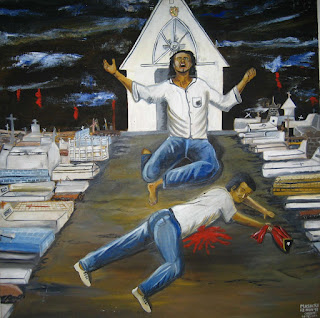 It is with profound sorrow that we remember the horrifying events of that terrible day and the innocent lives that were so brutally and mercilessly cut short by the agents of the murderous regime of the criminal Soeharto's Orde Baru.

It is with unceasing outrage that we contemplate the fact that none of the perpetrators of that awful crime against the individual who were killed, the East Timorese people and the whole of humanity has ever faced justice.

It is with deep disappointment that we consider that the international criminal authorities have failed to proceed with the establishment of an international criminal tribunal to try those accused of committing that and the countless other violations of human rights in East Timor during the 24-year long illegal Indonesian occupation.

It is with continuing rigour that we will continue to press for justice for those killed and their loved ones who still endure the agony of the grief and loss caused by the Santa Cruz massacre.