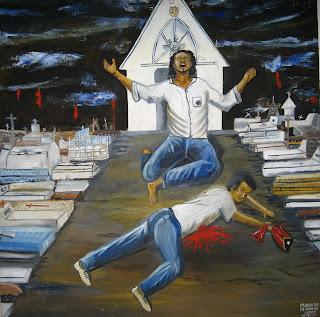 ETLJB 13 November 2012 - According to the Deputy Prime Minister of East Timor, Lasama, the youths who were killed by the Indonesian security forces at the Santa Cruz cemetery massacre in Dili on 12 November 1991 are national heroes.

Radio Timor Leste reported remarks by the Deputy Prime Minister saying that the youth on that day showed their commitment to fight for independence against the enemy. If they had not taken action, then it would not have been possible for the country to gain independence.

Accordingly, Lasama said, all youths today should be united in a spirit nationalism to build the country.

“I want to remind all of us that this year the international forces will withdraw from Timor-Leste and we will be in charge of our own security. Therefore I announce to all youth, students and people of Timor-Leste to maintain discipline and tolerance for others and solidarity to develop Timor-Leste,” he said.