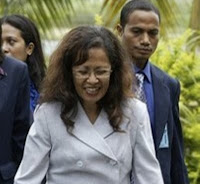 Timor-Leste's largest parliamentary party FRETILIN has asked the Prosecutor General, Dr Ana Pessoa, to investigate claims by an Australian advisor employed by the Ministry of Finance that he was the subject of a 'vendetta because of highly corrupt people.'

The tax and customs advisor, Mr. Graham Daniel, made the claim in an article in The Weekend Australian (25 April 2009) entitled 'East Timorese go begging whilst foreign advisors rake it in'.

The newspaper detailed the exorbitant salaries of international advisors hired by the Minister for Finance for a World Bank-funded project to which Australian taxpayers contribute around Aust.$13 million.

FRETILIN's parliamentary leader Aniceto Guterres said FRETILIN and other opposition parties had been questioning the hiring of highly paid advisors by the ministry for almost a year, but the Gusmao government so far had refused to release documents for parliamentary scrutiny – the same documents The Weekend Australian was able to obtain.

The newspaper said Mr. Daniel declined to say who was behind the alleged vendetta.

'We don't know whether Mr. Daniel's refusal to comment on the identity of the ‘highly corrupt people' extends to him not having officially reported this,' Guterres said.

'If not, he has a duty as a senior adviser to the minister to formally report the identity of these corrupt people and the nature of the corruption.

" We call on all international advisors to do the same, if they have knowledge of misconduct or corruption. After all, it is part of their job description to fight corruption,' Guterres said.

The Weekend Australian also said: 'The East Timor Government says Mr. Daniel has been humiliated in parliament by Opposition parties.'

Guterres told journalists in Dili today that neither FRETILIN nor any of the other four opposition parties had ever mentioned Mr. Daniel’s name in any context before last Monday 4 May 2009, and that Mr Daniel's name was only ever raised by an MP from one of the government's coalition partners.

'FRETILIN is concerned with the inference in the newspaper article that FRETILIN had engaged in this so-called 'vendetta',' Guterres said.

He added: 'We strongly deny any such suggestion. We have never had an issue with Mr. Daniel individually. We have only ever raised matters regarding the high advisor salaries and the lack of probity and transparency in the recruitment of some advisors because these are matters of public interest and concern.

'More concerning to us was Mr. Daniel's disclosure regarding 'highly corrupt people' engaged in a 'vendetta' against him.

'We have been concerned about growing corruption within the Ministry of Finance and other ministries in this de facto Gusmao government and been vigilant and proactive in investigating potential corruption.

'Its prevalence is now openly and regularly acknowledged even by the government's own MPs. The new deputy Prime Minister, Mario Carrascalao has named the Ministry of Finance as the most corrupt ministry (see FRETILIN Media Release of 6 May 2009). Mr. Daniel's very serious and clear comments add to this.

'This is why we have written to the Prosecutor General asking her to investigate Mr. Daniel's claims.'