Hearings Conducted in the Baucau District Court May 2009 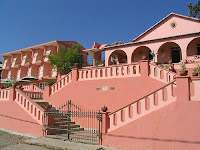 JSMP 25 May 2009 DILI - Hearings Conducted in the Baucau District Court May 2009 - The Baucau District Court conducted hearings as per usual although the rehabilitation of the court house often created noise and distractions to the judges, prosecutors and lawyers, and interrupted the examination of testimony provided by defendants and witnesses in the court room. Although there was a lot of noise the judges considered the hearings to be important and therefore patiently continued with their work.

During the aforementioned period (11-14/15) JSMP monitored court activities and observed that sometimes judges had to postpone hearings because of the non-attendance of parties at the court. Some of the parties notified the court in advance that they would be unable to attend, however others did not.

The cases that were postponed will all be heard in the near future (June).

The following information provides a short summary about activities at the Baucau District Court during the aforementioned period.

On 11/5 a hearing was conducted relating to a land dispute in the region of Maukali, Gariwai, Baucau involving the respondent PF and the plaintiffs F and others. The hearing took almost five hours (14.30-19.30). It took so long because the court had to hear testimony from six witnesses (3 from each side) to finish the case.

After hearing witness testimony, the court finally declared that there was sufficient evidence and asked each of the lawyers to make their final recommendations orally.

The lawyer for the respondent, Dra. Muzariah S.H., stated that none of the witnesses presented by the plaintiff had told the court that they knew about the document that was signed by the two parties (plaintiff and respondent) in relation to the land being disputed. The witnesses also stated that they did not know the history about who had originally started working the piece of land under dispute.

The lawyer for the respondent also added that one of the witnesses presented by the respondent, namely the former village chief during the Indonesian period had stated that he had good knowledge about the history of this piece of land, because a dispute had been taken to the village authorities in 1993 and 1995 and at that time the parties agreed to enter a written agreement that had been signed by them in front of the village authorities.

The lawyer also quoted the testimony of the witness who had said that “the contents of the agreement were that the plaintiff could only make use of the existing plants on the aforementioned piece of land, but could not plant anything else in the aforementioned field”.

Finally the lawyer for the respondent requested for the panel of judges to decide the case in good conscience and in the interests of justice.

The lawyer for the plaintiff said that during the trial none of the witnesses from either side could provide complete and accurate testimony. Each of them was only able to vaguely mention a part of the story relating to the land under dispute. Therefore the lawyer asked the panel of judges to decide the case impartially and honestly so that all parties could accept the court's decision in good faith.

After the judge read out the decision the judge reminded the defendant that if he committed a criminal act during the probation period or was brought before the court for another criminal offence then he would be immediately imprisoned. The court also ordered the defendant to pay court costs of $5.

On the same day the Baucau District Court adjourned another case of maltreatment involving the defendant JD. This is the third time this trial has been postponed. The trial had been postponed on two previous occasions due to the non-attendance of witnesses.

The third postponement was caused by the witness AD who was unable to provide testimony to the court because of ill health. In addition, the second witness JD chose to remain silent after being informed by the judge about the rights and obligations of witnesses.

The judge respected the decision of the witness and decided to adjourn the trial until 28 May to hear testimony from the witness JD.

JSMP noticed that the hearing was scheduled for 10.00 however it was delayed until 14.40. There was no clear explanation about why the parties had to wait for such a long time for the hearing to start.

JSMP also observed that the witness who was unable to give testimony due to ill health had been waiting for such a long period of time for the hearing to start. JSMP recommends for court actors to better manage their time and adhere to the schedules set by the court to respect the rights of the parties who collaborate with the court and comply with court summons.

JSMP would like to use this opportunity to recommend for the court to pay attention to little things as mentioned above so that the parties who have been notified by the court will be committed to truly cooperate and respect the schedules determined by the court.