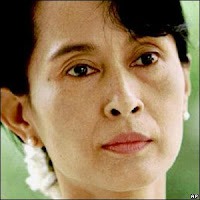 ETLJB 15 May 2009 SYDNEY - The East Timor Law and Justice Bulletin today condemned the Burmese government's arrest of democracy leader Aung San Suu Kyi and expressed solidarity with her and the Burmese people in a time of intensified persecution.

Ms Suu Kyi was charged under section 22 of the Burmese penal code provisions which prohibit the protection of a criminal with intent to disturb the stability of the state. Two assistants were also charged with abetting a criminal after an American citizen trespassed on her home where she has been under house arrest since 1989. If found guilty, Aung San Suu Kyi could be sentenced to a prison term of three to five years or fined or both.

The western district court in notorious Insein Prison on Thursday adjourned after a brief hearing and scheduled the next hearing for 18 May. After the court session, Aung San Suu Kyi was detained in the prison.

"The tyrannical Burmese state is ruled by an illegal government that has brutally suppressed democratic transformation in Burma" said publisher of the East Timor Law and Justice Bulletin, Warren L. Wright. "This latest manoeuvre is a mere pretext to extend Aung San Suu Kyi's detention that was due to expire later this month", he added.

"East Timor and its leaders were the subject of similar repression during the unlawful Indonesian occupation of the country for more than 24 years. But as the courageous people of East Timor proved to a world that turned its back on them while they were subjected to decades of genocide and massive widespread violations of their fundamental human rights, nothing can crush the aspirations of the people for freedom. They will prevail in the end."
at Friday, May 15, 2009