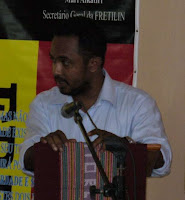 FRETILIN vice president and MP Arsenio Bano said today an inquiry by an internationally reputable firm was needed to uncover the extent of misconduct and mismanagement of the project by Finance Minister Emilia Pires, including her hiring of apparently under-qualified friends on exorbitant salaries.

The Dili newspaper Jornal Diario Nacional yesterday quoted Deputy Prime Minister, Mario Carrascalao, who was recently appointed to fight corruption within the Gusmao-led AMP government, as saying that allegations against another Minister in the government, the Justice Minister Lucia Lobato, are 'very grave' and needed to be investigated by the Prosecutor General 'soon'. On April 24 the Timor Post newspaper quoted Mr Carrascalao as saying that the highest indications of corruption in the whole government are in the Ministry of Finance.

FRETILIN has already asked the Prosecutor General, Dr Ana Pessoa, to investigate claims by an Australian advisor to the Finance Ministry that he was the subject of a 'vendetta because of highly corrupt people'.

The tax and customs advisor, Mr. Graham Daniel, made the claim in an article in The Weekend Australian (25 April 2009) entitled "East Timorese go begging whilst foreign advisors rake it in".

Bano said some donors to the project had privately complained of the Finance Minister’s lack of transparency and were fast losing confidence in the her management of the project.

'They have good reason given the almost daily revelations in the media of corruption, collusion and nepotism in key ministries such as Finance,' Bano said.

On 12 May, Prime Minister Gusmao and Finance Minister Pires held a news conference to defend the salaries and appointment procedures for the ministry’s foreign and local advisors.

But on 14 May the World Bank announced it was reviewing contracts between the government and consultants under the PFMCBP.

'The World Bank's policy is not to finance consultant contracts that fail to meet appropriate standards of competition and expertise,' the bank's statement read. The bank added it was 'concerned about the level and cost of international technical assistance' in Timor-Leste and had 'raised its concerns with the government about the need to reduce the number of consultants and ensure that international technical assistance delivers quality expertise and value for money for the citizens of Timor-Leste.’

Arsenio Bano said: 'So two days after the Prime Minister told the people of Timor-Leste everything about the Finance Ministry contracts was OK, the World Bank puts out a media release stating otherwise.'

'FRETILIN is concerned that an impasse may be developing between the government and the World Bank over this issue. An independent external audit would be the best disinfectant for this scandal.

The international community including the World Bank has invested a great deal of time, effort and money in developing institutional capacity in our country. FRETILIN in government cooperated closely and successfully to build key finance and revenue institutions from scratch, handing over to the AMP a functioning public administration and a sovereign petroleum fund which is the envy of many nations. The World Bank played a big role in establishing these.

We cannot afford to lose their trust and confidence.”