Land Policy in East Timor - The Cart before the Horse 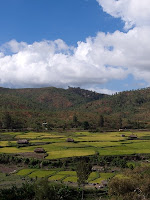 ETLJB SYDNEY 2 May 2009 - Who are the lawful owners of this valuable agricultural land in Aileu, East Timor? The government seems intent on finding out who owns the land in East Timor without there being the sound foundations of a reformed land law or land right registration decree law. (see also the following posts in this blog: Government to start land data collection in Liquica and Manatuto, East Timor Nationwide land data collection to start in East Timor and East Timor Ministry of Justice & DNTPSC Launch National Property Cadastre)

The question that arises is why should the government proceed in such an exercise before there is legal clarity about the status of the 40000 odd land rights (over most of the most valuable land in East Timor) created during the Indonesian occupation, or about the abolition of the Portuguese land rights created during the colonial period, or, even, indeed, about the status of land rights that exist over most of the national territory by virtue of local customary law.

The data collection program seems to be an odd approach based on a misinformed policy. It ought to have been preceded by a comprehensive land law that resolved the legal problems and one that provided for a proper process for land right ownership determination and recording that incorporated the judicial system in the event of disputes and conflicts - frequent and violent occurrences in East Timor's cities and the countryside.

The data collection exercises bring no clarity or certainty to the legal ownership of land in East Timor. This program is not being conducted in accordance with the conventional land right registration policies and laws. There was already a national claims registration process some years ago. It is a shame that so much money and resources are being consumed in this way. It will be a greater shame if it results in the unjust entrenchment of unverified claims and that carries the risk of further disintegration in the social relations in East Timor that relate to land. (ETLJB 1/5/09)
at Saturday, May 02, 2009