Witchcraft and Murder in East Timor 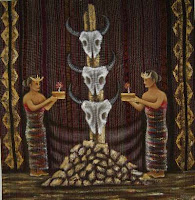 2009 ETLJ 6 Witchcraft and Murder in East Timor - In staunchly Catholic East Timor, it is anomalous that there persists a strong belief in witchcraft. In September, 2000, this first came to focus the attention of the judicial system when four men were tried for allegedly torturing and killing an elderly woman accused of witchcraft.

The facts of that case came to light in the court in Baucau, East Timor's second largest city. A 62-year-old woman was murdered in the easternmost region of Los Palos in December, 1999. According to the prosecution, the woman was tortured and left for dead by four men after having been accused of killing children by witchcraft.

On 7 January, 2007, three women accused of being witches were killed and burned along with their house in East Timor. The three women, aged 70, 50 and about 25, were killed at Maubaralisa (subdistrict Maubara, district Liquica), about 40km west of the capital Dili. They were Bui-dau, 70, Flora, 50, and another (unidentified) woman about 25 years old. They had been accused of being witches. Three suspects were arrrested.

As recently as May, 2009, the issue of witchcraft hit the nation's headlines once again with East Timor's national broadcaster, RTTL, reporting that the East Timor National Police Deputy Commander Inspector Afonso de Jesus had called on residents in the capital Dili not to believe in rumor-mongering that there was a witch named Margareta flying around the city.

"...in one case involving witchcraft, an UNPol officer directed a deeply upset local who approached him with this complaint to deal with it in the traditional way.

A man had accused the complainant’s daughter of witchcraft and cursing his family. The UNPol (United Nations Police) officer had no authority to deal with accusations of black magic. A few days later, the complainant returned and advised the UNPol officer that he had done as told, and dealt with the problem using traditional means; he killed the accuser.

It should be noted that generally witchcraft punishments are not so severe, but that is not always the case; it depends on the ‘severity’ of witchcraft involved, or the degree to which the wrongdoer has disturbed the community’s system of value-circulation and socio-cosmic balance."

Other contemporary societies where witchcraft poses similar problems include Ghana. On 7 May 2009, it was reported that the District Chief Executive for Bongo, Mr. Clement Abugri Tia, had threatened to cause the arrest and prosecution of anyone who unjustifiably accused his or her neighbour of being a witch or wizard.

Speaking to the media after his confirmation at Bongo, Mr. Abugri noted that those responsible for such unjustifiable accusations have not been prosecuted, hence their continued branding of others as witches and wizards.

According to him, witchcraft has no scientific evidence, and cannot be supported by any law, therefore people cannot use it to violate the rights of others by subjecting them to all forms of physical assaults, or in some cases killing them because they claim these persons are witches.

Mr. Abugri urged his people to leave those they claimed were witches or wizards to God to judge, since he was the only one who knows a man’s heart, and the only one who could judge such people, if really they were so.[1]

The social problem of the supernatural belief in witchcraft in East Timor poses not only serious questions for the Christian soul, but also presents the justice system with the fatal consequences for women accused of witchcraft - torture and murder at the hands of vigilantes and the traditional community leaders in East Timor who administer the customary justice system.

Many anthropologists who lack a comprehension of the concepts of democratic secular law and justice, are ardent supporters of traditional justice systems even though they posit supernatural hypotheses for the explanation of the realities of social disharmony and criminal conduct and impose corporal punishments and worse tortures on citizens accused of the impossible crime of witchcraft.

In his analysis of this issue in the context of traditional local dispute resolution mechanisms, Harrington writes:

"While the ideal is a perfectly efficient and effective justice institution, this simply may not be feasible due to scarce resources or subject matter. Following Qian, in a given situation that which is feasible, not necessarily best, may be what ought to be sought. If an “antiquarian” traditional local dispute resolution mechanism is consistently used, is persistent, and operates on issues outside the formal sphere, then it likely qualifies as feasible. That they are capable of dealing both with issues formal mechanisms can and cannot, but faster and cheaper, perhaps further attests to local dispute resolution mechanisms feasibility. Through a neo-antiquarian lens, local dispute resolution mechanisms are better than merely feasible; they are truly home-grown and not merely connected to a culture, but rather are that culture.

This point must be qualified in two ways, however. While the neo-antiquarian view states, ‘new’ is not always superior to ‘old’, there is no guarantee that ‘old’ is superior to ‘new’. Edgerton broaches this issue in response to overly relativist anthropologists:

[T]raditional beliefs and practices may be useful, may even serve as important adaptive mechanisms, but they may also be inefficient, harmful, and even deadly.”[2]

He terms this ‘maladaptation’. The main point: even if a practice exists within a culture this does not necessarily ensure it is well adapted and beneficial to that culture. There are certainly numerous examples of specific practices within Timorese local dispute resolution mechanisms that seem blatantly maladaptive."

Supporting and encouraging traditional justice systems that are, in any event, anti-democratic and that admit allegations of witchcraft into "evidence" as well as the violation of human rights including the denial of representation of minors accused of offences and torture of an accused, will only sustain a framework for the perpetuation of the belief in witchcraft - and, tragically, more murders of East Timorese women.

As the then President of East Timor observed in 2003, "[c]ommon or traditional laws represent the stage of evolution of a society and usually correspond to societies based on feudal relationships both in the social and religious (non-formal religions) aspects; both aspects are combined with the political and economic ones and add to another which refers to castes as the lower echelons of society, slaves and those who practice witchcraft and whom are usually denied rights.

Traditional justice in East Timor is enforced by traditional chiefs acting as the authority, by the elders whose experiences prevail and by the 'lia-nain' (literally: keeper of the word) who are considered the men of law. The 'lia-nain' are usually the custodians of the 'lulik' (all that is sacred) or have some link to it; this derives from the need to link that which is real to that which is ethereal in order to accord moral credibility to whichever solution is adopted.

This combination of factors normally (not necessarily always) brings grave implications in the shaping of justice. One factor arises from the status held by the agents of justice and the other from the extremely powerful influence resulting from the interpretation of the facts, usually explained by resorting to the supernatural and often denying the realistic content of the values of justice (or overriding reality itself).

If we know how to take advantage of the positive aspects of traditional justice and to identify its weaknesses as a mechanism and in its values, traditional justice (in other words, 'Community-applied Justice') will play an important role in preventing minor problems from dragging on and becoming major conflicts, inducing families or even entire hamlets against each other.

It is absolutely necessary to place modern laws within a context to counterbalance the confines of the interpretation of values by traditional Justice, so as to clearly define the limits to which traditional justice must comply with and thus avoid trampling on the spirit of the law of a country or stepping on human rights. Consequently, it will be possible to establish which level of dispute in villages should be handled by traditional justice.

For traditional justice to gain greater credibility it is necessary to reorganise its components; this will enable these 'courts' to truly serve the communities and continue to be open and accessible to the general public at a greater level."[3]
-----
Footnotes

1. "Witchcraft alarmists will face prosecution" in The Ghanaian Journal 7 May 2009
2. Edgerton, Robert B. “Traditional Beliefs and Practices –Are Some Better than others?” in Laurence E. Harrison and Samuel P. Huntington, eds. Culture Matters. How values shape human progress (New York: Basic Books, 2000) p 131. per Harrington A Institutions and the East Timor Experience
3. see Gusmao, Xanana On the occasion of the International Conference on Traditional Conflict Resolution & Traditional Justice in Timor-Leste 2005 ETLJ 3