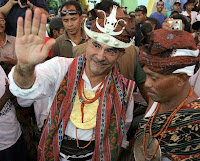 ABC 22 May 2002 - President of East Timor, His Excellency, Dr Jose Ramos Horta, yesterday awarded the Timor-Leste Medalha de Merito (Medal of Merit) to two Australian Army Officers for their service to East Timor during the past ten years.

Major General Mick Slater, DSC, AM, CSC, and Major Michael Stone, received the Medal at the President’s Office in Dili. The Timor-Leste Medalha de Merito is the highest recognition that can be bestowed by the President of East Timor.

President Horta said Major General Slater’s contribution to East Timor exemplifies the values of the Australian Defence Force and noted, in particular, his leadership of the International Stabilisation Force which was deployed in response to the break down in security in 2006.

Major Stone was honoured for the unique role as a peacemaker he has played in East Timor during the past decade. President Horta said his profound understanding of Timorese culture and language has enabled him to promote peace and reconciliation throughout the country, gaining the respect of its people.

Major-General Slater, now Commander of the Army’s 1st Division, led the Second Battalion, The Royal Australian Regiment during the original Australian deployment into East Timor in 1999. He subsequently commanded the International Stabilisation Force in 2006.

Major Stone saw two deployments to East Timor from 1999 and deployed twice again as an advisor to the East Timor Defence Force. He currently serves as an advisor as part of the Defence Cooperation Program in East Timor.

Image added by ETLJB: President of East Timor Jose Ramos-Horta.
at Friday, May 22, 2009