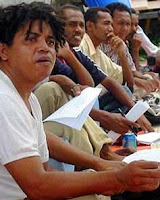 By Matt Crook DILI, May 15 (IPS) - Journalists in East Timor are anxiously waiting for a set of media laws to be revised after a negative reaction to a draft that was circulated in March.

Portuguese Lawyer Isabel Duarte was hired to draft the laws by the United Nations Development Program (UNDP) on behalf of the government.

She presented a set of five laws at a meeting with the press on Mar. 17 in Dili. Journalists were vocal about their concerns that the laws could restrict freedom of the press.

Local reporters are worried about proposals to set up a media council with the power to fine journalists as well as issue and revoke journalists' licenses. Members of the media council would be appointed by the National Parliament while fines collected would go towards the council’s budget.

UNDP’s Media Development Representative Miguel Caldeira said, "We held six months of consultations with journalists. These five draft laws are the result of a study done by Isabel [Duarte] on the advantages and disadvantages of having one or more laws. She decided after listening to everyone to put it into five."

A number of international organisations weighed into the debate and suggested that Duarte’s draft had a number of shortcomings.

Ken McKinnon, of the Australian Press Council, said in a statement that the draft laws could "greatly affect the operation of a free press in the world’s newest democracy."

John M. Miller, national coordinator of the East Timor and Indonesia Action Network, told IPS, "A free press must be that, with the fewest possible restrictions. Should the government feel it necessary to designate who and who is not a journalist for any purpose, the criteria of who is a practicing journalist should be broad. Otherwise, the licensing of journalists or provision of media passes can undermine a free press and contradict the evolving nature of media.

"The fledgling East Timorese media can certainly stand improvement, but this can best happen from professional development, greater investment and less fear of offending the powerful," Miller continued. "The proposed law could have the opposite effect on the last two."

The Southeast Asian Press Alliance released a statement saying, "The proposed media laws cover a wide range of matters from access to information to community broadcasting, but are headlined by a draft media law and media council law. These bills… represent a stumbling block to the young nation’s path towards democracy and economic stability."

After initial discussions on Mar. 17, Duarte held two further meetings with journalists and members of the Commission of Legislation for Social Communication (Kolkos), a body made up of members of the media and the private sector to monitor laws affecting press freedom.

Caldeira added, "Since Isabel [Duarte] came, she met the journalists twice and she got all their recommendations. She listened to them and included all their suggestions because this is their draft as well."

With Duarte back in her native Portugal, the draft is in the hands of UNDP to perform the finishing touches on the laws. "There is no pressure to rush or speed up the process. We want to make sure the documents are OK," said Caldeira.

Member of Parliament (MP) Fernanda Borges is the chair of Committee A, the parliamentary body responsible for assessing the laws.

"It’s not just regulating a bunch of workers - it’s about freedom of speech, it’s about making sure that is always occurring in East Timor," she said. "We need to understand our capacity in the country to be able to do things. The less complicated laws are for a country like East Timor, the better and the easier it is to implement and for people to embrace and abide by."

Duarte, who refused to be quoted by IPS unless her answers were printed in full and accompanied by translations in Portuguese, said she is concerned about how events have unfolded since March.

The draft belongs to parliament and should only be up for public discussion once representatives from parliament have given their blessing to a single version, said Duarte, adding that she believes the usual circumstances for discussing the draft were changed to make up for a lack of work done by Committee A.

Virgilio Guterres, president of the Timor Lorosa’e Journalists’ Association, said, "The logic of the process should be the other way around. UNDP and lawyers should assist Timorese journalists to draft the new law. They should listen to what the Timorese want to happen and then introduce that in legal language to become law, not arrive with a legal draft and ask the journalist to discuss it."

Meanwhile, Secretary of State for the Council of Ministers Hermenegildo Pereira said that while it is unlikely that Timor-Leste’s media laws will be ready until 2010, a press council should be formed based on Article 15 of the Indonesian Press Law.

According to Article 15, the press council’s membership would comprise journalists, media managers, public figures and media experts, while the council’s purpose would include protecting press freedom and mediating between the media, the government and society.

In 2004, East Timor was already in the initial stages of setting up its own media law.

Borges added that she has urged local journalists and Kolkos to come up with a fresh draft, but nothing has been done yet.

If the process takes too long, there is a danger that the National Parliament might be forced to implement a law that nobody is happy with, she warned. (END/2009)