Dili woman died after being hit by Australian army vehicle 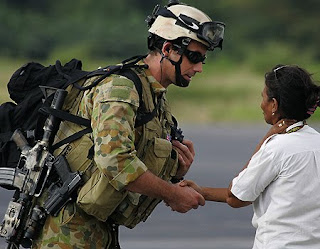 Sydney Morning Herald January 22, 2010 - AN AUSTRALIAN Defence Force vehicle in East Timor struck a pedestrian last month, and she later died, but the Department of Defence has taken almost three weeks to make the information public.

The department issued a statement yesterday saying an accident between the vehicle operating as part of the International Stabilisation Force and the East Timorese pedestrian had occurred on December 18.

First aid was given by Defence Force personnel, and the woman was taken to hospital with a broken leg and lacerations.

It was not until the medical officer visited the hospital on January 1, and inquired about the woman's condition, that it was advised the woman had died on the evening she was admitted.

A Department of Defence spokeswoman declined last night to comment on why the information had not been made public earlier. ''The ISF immediately contacted local police to offer assistance in the investigation and were informed the matter was not under investigation,'' a defence media statement said.

It also said the International Stabilisation Force was conducting an internal investigation.