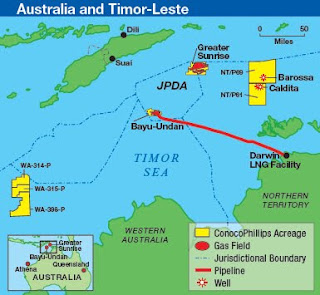 Published: Jan 27, 2010 Offshore staff HOOFDORP, The Netherlands -- ENI has issued a Letter of Award to Bluewater Energy Services for an FPSO for the Kitan field in the East Timor/Australian Joint Petroleum Development Area.

Confirmation of the award is subject to ENI gaining approval from its co-venturers in the Kitan project, Inpex and Talisman, and the East Timor government.

If confirmed, Bluewater will supply the FPSO Glas Dowr, which formerly operated on the Durward/Dauntless fields in the UK North Sea, for a minimum term of five years after the start of production, extendable to 10 years. The award as its stands covers chartering, operation and maintenance of the upgraded vessel, along with mooring systems, and provision of logistics and ancillary services.

In the Norwegian North Sea, Bluewater has opted to sell its 55% interest in the Jotun A FPSO to Jotun field operator ExxonMobil Exploration and Production Norway and Standard Marine Nordsje. Stabdard already owns a 45% interest in the vessel.