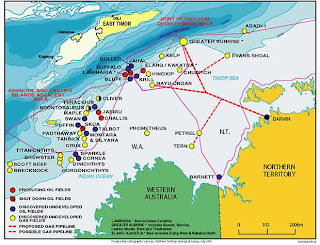 Jan. 13 (Bloomberg) -- Woodside Petroleum Ltd. said Australia, East Timor and partners of the Sunrise liquefied natural gas project are “required to develop the reservoir” as part of an agreement.

“Under the International Unitisation Agreement, the governments of Australia and Timor Leste and the Sunrise joint venture participants are required to develop the reservoir to the best commercial advantage,” Woodside’s spokeswoman Yvonne Ball said in an e-mail today.

East Timor will block Woodside’s plans to develop the Sunrise LNG plant, the Associated Press reported, citing a statement from Secretary of State Agio Pereira. Plans to either pipe the gas to Darwin or process the fuel using floating LNG technology won’t be approved by the government, according to the report published on the Sydney Morning Herald Web site. Telephone calls to Pereira’s office were not answered.

Woodside and its partners in Sunrise, which include Royal Dutch Shell Plc and ConocoPhillips, are deciding “a development theme selection that will accord with key treaty requirements,” Ball said.

Australia and East Timor completed a treaty in 2007 for the administration of the Sunrise field, which straddles a boundary between Australian waters and an area jointly managed by the two countries. The countries agreed to share royalties.

Woodside owns about 33 percent of Sunrise and is the operator, while Houston-based ConocoPhillips has a 30 percent stake. Shell has about 27 percent and Osaka Gas Co. 10 percent.

To contact the reporters on this story: Jason Scott in Perth at jscott14@bloomberg.net; Dinakar Sethuraman in Singapore at +65- dinakar@bloomberg.net.