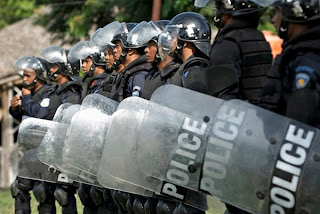 Mr Comacoshe, a participant in the fishing competition, which attracted entrants from Australia and Asia, was punched, kicked and bashed with a rifle butt on a beach on Atauro Island, 25 kms off the coast of the capital Dili, in full view of hundreds of people.

Film of the assault which happened soon after President Ramos-Horta officially opened the competition has been posted on YouTube - http://www.youtube.com/watch?v=6R7uMaO0e_4

Mr Teixeira said Mr Comacoshe was apparently beaten because he held up a placard on which was written, “Fishing Group From Suco Maunroni, Sub-District of Atauro, District of Dili”, identifying from where his group of competitors were and which he intended to affix to their boat, but the police took objection to it without any explanation, and forcibly removed from his possession, afterwards assaulting him.

Mr Teixeira said police were now persecuting Mr Comacoshe and his family for daring to report the incident to the Ombudsman for Human Rights and Justice, the Attorney General and parliament.

"In an apparent act of revenge for having the temerity to lodge a complaint, police on 13 January evicted Comacoshe's law-abiding family from a state owned house they had lived in for six years. There was no formal notification from the government - the village chief and police turned up and threw their belongings out the door, after having threatened him with loaded weapons.

"If president Ramos-Horta had spoken up earlier it might have avoided reprisals against Comacoshe and his family, but the President obviously did not want to spoil the media glow generated by the international fishing competition organized by his office. Many people, the victim included have asked me, ‘Is this what it means to be a President for the for the poor and the weak, as he claims widely?’ I have to ask the same question."

Mr Teixeira said Mr Comacoshe's family had now sought refuge in Dili and have yet to receive any assistance from the government.

"Complaints of police brutality are happening with an unprecedented frequency and on an unprecedented scale. We have citizens making complaints almost every day now. In the past two weeks we received complaints about police joining in with martial arts groups and using violence against their rivals.

"Late last year in Uatolari, Viqueque district, police allegedly assaulted and tortured a number of young men. On 28 December 2009 police shot and killed an unarmed young musician at a party in Dili.

"There is something very wrong with the way police are being trained and commanded. Local media on January 27 reported the new police commander Longuinhos Monteiro as saying in regard to alleged criminal activity recently carried out in border districts by masked groups known as ninjas, 'Any Ninjas who want to take us on, your final stop will be Santacruz' cemetery.'

"The government pays lip service to 'community policing' but it is all about the use of force, force, force, relying on weapons, weapons, weapons. We already have an army, we do not need a shadow army. We have many professional and dedicated policemen and women who feel the same way we do and have asked us to speak up for them to change the direction of policing in this country. They want to serve their communities with pride and professionalism, and deserve our support," Mr Teixeira said.

He said FRETILIN was preparing to table the terms of reference for a Parliamentary Commission of Inquiry into police action over the last two years to establish whether there have been breaches of the law and what can be done in terms of improving police training and legal controls to make policing more community friendly and respecting of human rights.