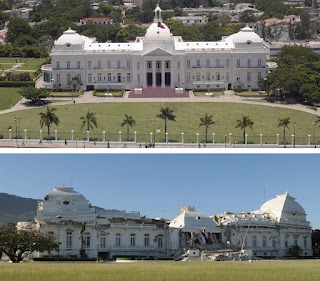 ETLJB 18 January 2010 - ETLJB expresses the deepest condolences to the people of Haiti after their capital city Port au Prince was destroyed in a massive earthquake - leaving tens of thousands dead and hundreds of thousands injured. Unknown destruction outside of the capital remains to be encountered.

This image shows the Presidential palace - the centre of political power in Haiti and symbol of the nation - devastated by the horrifying tremblor.

Along with the buildings and the lives of those lost and injured, the rule of law is also crumbling rapidly as violence and chaos threaten to cascade into further destruction.

Looting, mob justice and summary executions have already commenced. The security forces are dysfunctional as is the entire state apparatus.

Delays in international aid will further endanger public security and law and order.

You can assist by donating to the Red Cross and Medecins Sans Frontieres
at Monday, January 18, 2010