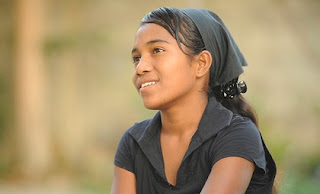 From SMH LINDSAY MURDOCH ,DARWIN AND STEVE TICKNER, DILI January 28, 2010 - THE family of an East Timorese woman who died after being hit by an Australian Army vehicle in December believes the army should compensate them.

Soldiers were unaware for 13 days that mother of nine Gracinda da Costa, 65, had died from a head injury hours after being struck while walking along a Dili street early on December 18.

Mrs da Costa's family say no Australian soldiers from the International Stabilisation Force (ISF) in East Timor have contacted them to explain what happened, express regret or offer compensation, which is expected under Timorese tradition.
Killed: Gracinda Da Costa.

Australians serving in East Timor effectively have immunity for crimes they commit, on or off duty.

Cornelio Baros, Mrs da Costa's son-in-law and the family spokesman, told The Age the family received Mrs da Costa's body from a hospital the day after she died but had not been contacted by anyone in authority, including the ISF, the United Nations and Timorese police.

''My family is upset we have not heard anything since the accident,'' Mr Baros said.

He said the family appreciated how Australian soldiers had helped bring peace to East Timor, but ''they need to take care of their responsibilities and not harm those they seek to protect''.

Mr Baros, a former World Vision employee, said compensation was warranted because of the hardship Mrs da Costa's death had caused family members, including her daughters Fatima, 13, and Josefina, 15, who are now living with different families.

''I miss my mother very much and am very sad,'' Josefina said. ''I loved her very much because she did so many things for us, cooking, mending clothes, providing things we need for school and constantly looking for work to find money to support us.''

Under Timorese tradition, families are compensated, even in a token way, by people involved in a death, no matter who is to blame.

A brief statement issued by the Australian Defence Force on January 21 - more than a month after the accident - said ISF personnel administered first aid to a woman they did not identify before she was taken by an East Timorese ambulance to the Dili hospital.

It said an ISF medical officer who went to the hospital that afternoon confirmed she had only a broken leg and lacerations.

But family members and hospital staff have told The Age that Mrs da Costa's injuries were severe. Mr Baros said she had a 10-centimetre opening in her skull. Doctors had operated for three hours to try to save her but told family members her condition was ''helpless''.

A Defence spokesperson said yesterday that when an ISF officer left the hospital, Mrs da Costa was stable, conscious and alert.

The Defence statement on January 21 said it was not until January 1 that an ISF medical officer asked about the woman's health during a visit to the hospital and was told she had died on the evening of admission.

When he arrived at the scene shortly afterwards she was lying on the ground bleeding heavily from the head.

Mrs da Costa lost everything when her home was burnt down by pro-Indonesian militia in 1999 and she struggled to raise her nine children and many grandchildren.

One of her sons, Leopoldino Exposto, 27, was shot dead alongside rebel leader Alfredo Reinado at the villa of East Timorese President Jose Ramos Horta on February 11, 2008.

In response to questions from The Age, a Defence spokesperson said yesterday that as Timorese police were conducting an investigation ''it is inappropriate for the ISF to be in contact with the da Costa family''.

The spokesperson said an ISF vehicle was unable to avoid hitting Mrs da Costa as she was attempting to cross the road, and that an ISF medical officer gave Mrs da Costa's family compensation claim forms on the day she was admitted to hospital.

But Mr Baros told The Age the family had no idea how to seek compensation.

He said he was told by the office of East Timor's Secretary of State that the ISF was responsible for the death.

The status of Australian troops in East Timor has been controversial since they were sent there in 2006 to quell violence.

The Howard government refused requests by the government in Dili and the United Nations for the Australians to be put under UN command.

Under the UN's system of accountability, national forces operating in foreign countries must answer to an outside body.

La'o Hamutuk, a Timorese non-government organisation, told an Australian parliamentary committee in 2008 there needed to be a ''clear, independent and transparent process for Timorese citizens to report to resolve complaints against the Australian military''.

La'o Hamutuk told the committee that Australian forces in East Timor should be integrated into the UN peacekeeping chain of command.

Image: Josefina Ba Kita, 15, was orphaned when her mother was killed by an ISF vehicle in Dili. Photo: Steve Tickner
at Thursday, January 28, 2010