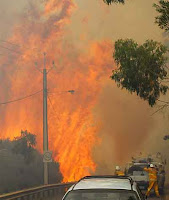 ETLJB 08 February 2009 08:30 hrs SYDNEY Huge firestorms are sweeping across the southeast region of Australia leaving dozens dead and whole towns destroyed. At least 25 people have been confirmed dead and hundreds of homes destroyed in the southern most-populous states of Victoria and New South Wales. With 40 bushfires raging in New South Wales and 40+ degrees celsius temperatures expected to continue today, authorities are struggling to cope with the maelstrom with many fires blazing out of control.

The fires in Victoria are the worst in the State's history according to the State Premier, Mr Brumby. The historic Victorian town of Marysville has been virtually obliterated and another town, Kinglake, has suffered a similar fate. The front of one fire is 20kms across, according to emergency personnel. Firefighters are battling walls of flames 40 meters high lashed by 100+km winds.

The death toll is expected to rise dramatically as devastating scenes of destruction continue to emerge.

Thousands of hectares of forests have been turned to ash.

ETLJB expresses deepest sympathies to the families who have lost loved ones and their homes in the Australian bushfires and floods.
at Sunday, February 08, 2009