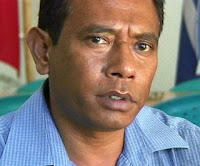 5 May 09 9:49 AM Angola Press - Luanda – The East Timor National Assembly speaker, Fernando La Sama de Araujo, said Saturday in Luanda that his country is enjoying political stability and is moving towards development.

Fernando La Sama de Araujo said so during a meeting with a delegation of the Angolan parliament, headed by its speaker, Fernando da Piedade Dias dos Santos, within the framework of his two-day visit to Angola that ended on Saturday.

He said that after the political instability the country went through in 2006 and the attempts on the president of the Republic and the prime minister, Jose Ramos Horta and Xanana Gusmao, respectively, in 2008, the situation normalised, being the consolidation of democracy a real fact at present.

“The process of reconciliation among the political forces, led by president Ramos Horta, is on good track,” stressed Fernando da Sama de Araujo, after underlining the contribute of Angola to the process of decolonisation of East Timor.

According to the Parliament speaker, one of the challenges for the Timor authorities has to do with the Portuguese language, as the country is threatened with the invasion of English.

He said Portuguese has to be consecrated as the official language, stating that only 10 percent of the population speaks it fluently.

In order to settle this matter, Fernando Araujo asked for Angola’s assistance, in addition to actions in the sectors of exploration of oil, defence and security and creation of the Supreme Court, with a view to the political stability and democracy.

He called for the establishment soon of an Angolan diplomatic mission in Dili, and an air connection between the two countries, to facilitate the contacts.

It is great that Timorese can speak English.

I think we should keep the portuguese languange in our museum as history for our generation because the presence of catholic religion all ready shows the Portuguse identity. Globalization and free market ecourages people around the globe to study english language as modal for competition. If we ignore the role and the importance of English languages in this planet, we will leave behind all the things happen around us. In addition, if East Timor would like to be a developed and an industry contry as Japan, South Korea, Singapore and Hongkong please do not force the new generation to learn portuguese languge as obligation.Moreover, do not forget that geographically East Timor is located between two big countries which are Indonesia and Australia. So we need to learn both languages from those nation wich are more beneficial to us rather then portuguese.

I think the word "invasion of English" above this article that used by mr. Lasama is totally wrong.In contrary, We should give many thanks to the people whos introduced the English language to Timor-leste because it is an international language and nothing wrong with young people to learn it. Moreover,we do not need extra money to send young peole abroad for english learning like china, japan and south korea sending thousand and thosand people abroad just for learn english.

I agree with the above comments. There is no way for this little country to improve its economy, unless we have to understand some important lenguages like English and Indonesia. There is no doubt that our economy relies on Indonesia and Australian economy. So there is an advantages in using both languages.
Using English is being an attractive for young people of East Timor as it make easier to find jobs. There are few INGOs around the country that involve young Tiomorese who are able to speak English. This oppurtunity is bassically also helping goverment in reducing unemployment.
The most crucial part is that our neighbour Australia has a very strong international standard of Education systems. To get benefit from this country one shall understand or send student over Australia to get educated from it. Unfortunately we spent too much money on English course. This means that if English becomes popular in East Timor, possibly East Timorese go to University stright away. So we save a lot of money. We can see this example from countries like Singapore, Malaysia and Philipine.
Indeed there will be a lot of benefits for Timorese if we can adapt this language. This language can also attract people of Western Timor to come over East Timor to study there and thus they will spend money there and ofcourse cntribute to our economy. I personally happy with the progress of English in East Timor

I don't see any future benefit would be from using Portugues at all. We all recognise that have had done a lot for us, but it doesn't mean that we have to stick with Portugues forever. We need to see the real problems we have at moment. For example there are many problems accumulated in the court just because of the portugues. I believe people in the court are busy and struggling in translation into the portugues or other way around instead of finding solution. Therefore the problems are accumulated. This is just waste time and money

I think it is good to use portuguese linguest in East Timor as a history linguest. I also agree with some coments abov, is that economically unbenefit by using portuguest linguest in East Timor as an oficial linguest. But in politically i saw there were to,o many benefits for our country. First thing is politically we have protected by the organization CPLp, The historically linguest will no lose, we have good relation with Europe whether we are not member of Europe. The secon is Educationally we know many kind of linguest in the word, if portugues linguest not existed in east timor rule i thin not many people will learn this linguest.The problem now is many of our young people and almost all teachers in this country reject how to teach and haw to learn. I want to sugest that as a student our responsability is to study and to know something that we diden't know, and as a teacher our responsability is how to make the lestion easy for the student to know.