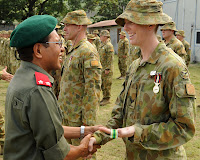 Ruak added that the deployment of the ISF was based on the agreement made by the Timorese Government and therefore its withdrawal should not be based on one or two people's will but should be based on the decision of the Government.
at Saturday, January 15, 2011