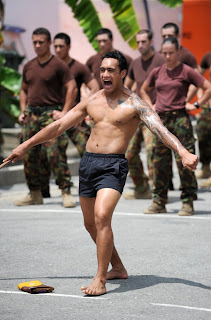 A traditional Maori Powhiri has marked the changing of commanders for New Zealand’s military commitment to the Australian-led International Stabilisation Force (ISF) in East Timor.

Commander Millar, who served six months as both the Deputy Commander – ISF and as the Senior National Officer of the New Zealand forces assigned to ISF, said he will remember with pride the contribution New Zealand military men and women have made in improving the security and stability of East Timor.

While Commander Millar said he would be glad to see his wife again and settle back into domestic life, it was still difficult to leave his team behind.

“It is never easy to hand over the reins of something that is so positive,” he said.

“We have a great bunch of people, so it is sad to leave.”

Commander Millar said the standout moment of his deployment was the teamwork that existed between the Australian and New Zealand forces that make up the ISF.

“The shared abilities and the spirit of ANZAC bring out so many things,” he said.

“It is a force multiplier and makes us proud to be members of the South Pacific community.”

Wing Commander Leske said he was honoured to become the latest New Zealand commander for the 70-strong force.

“A Powhiri is quite a spiritual service, and to hold one for this event is a special moment for commanders and troops alike,” he said.

“I look forward to continuing the work of developing a safe and stable East Timor leading up to the 2012 elections,” he said.