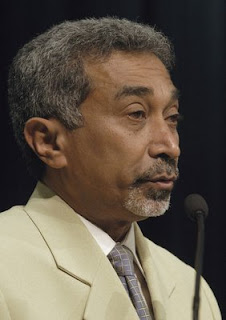 (Translation from Portuguese) MSO - Lusa - 15 Outubro 2009 Dili - The secretary general of Fretilin, Mari Alkatiri today told Lusa that, given the results of local elections, unless there are substantial changes from the recount, the government should resign and be early parliamentary elections should be held.

According to Mari Alkatiri, "if there are no substantial changes to the results (in the elections for the sucos, which were held on 09 October), FRETILIN has 55 percent of the votes on our own and together with our allies from other parties we have more than 70 percent of the votes."

Some parties had candidates for heads of sucos [a cluster of villages], but at the level of village leaders and other candidates, "many are members of FRETILIN," according to the leader of the largest political opposition force.

Although the elections for the sucos not officially having candidatures from parties, Mari Alkatiri said that the current government has no legitimacy and should resign.

"Given these results, if they are capable of feeling the slightest of shame, they would resign. If this government falls, what the President has to do is to call on the formation of a new government comprising of the same alliance, or call early elections. New alliances and arrangements, with the Fretilin no!", he said.

Fretilin won the 2007 legislative elections, but without having control of the Parliament, leading President Ramos-Horta to appoint a parliamentary majority coalition led by Xanana Gusmão's CNRT.

To Alkatiri, this executive, which he calls the "de facto Government”, has no legitimacy.

"What we want are early elections. If we are to govern we want to govern for five years, especially since in these two years and some months they (the current government team) have only destroying, ruining the institutions and doing everything over their knees," he said.

For the FRETILIN leader, not even the success claimed by the government that it has virtually ended the camps of displaced persons can be acknowledged, because it was an objective of the whole of society.

"It can be clearly seen that there was no attempt on our part to politically exploit the issue of the return of the displaced persons. It was a success for everyone because everyone wanted the problem to be resolved," he said.

Mari Alkatiri promises to continue to be an opposition, "awaiting the municipal elections, that Fretilin will also win."

"We do not want to do what they did in 2006: take to the streets to burn houses, kill people, a real coup under the pretence of constitutionalism," he said, alluding to the crisis three years ago that led to the resignation of Alkatiri as prime Minister, when Xanana Gusmão was President.