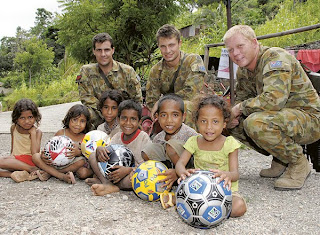 Uzunov said he had enormous respect for the popular commander of the successful Timor mission (INTERFET) Australian Army General Peter Cosgrove and he deserved to be recognized.

"But we must also acknowledge the actions of then Chief of the Australian Army Lieutenant General Frank Hickling," Uzunov said.

The Interfet Mission led by Australia intervened in East Timor to avert a catastrophe after the tiny Southeast Asian land had declared its independence from Indonesia in August 1999.

Interfet then handed over control to the United Nations Transitional Administration for East Timor (UNTAET) in January 2000, and the Australian media believed the militia had been defeated. But the militia was simply biding its time and waiting to strike at what it thought was a soft target, Australian Army reservists.

Legendary infantry battalion 6RAR from Brisbane would be the next to go to Timor. It had, over the past decade, been gutted by cost cutting by defence experts. 6RAR had to be rebuilt with reservists grabbed from other units around Australia.

When 6RAR arrived in East Timor in early 2000 it came under ferocious militia attack but held its own.

In 2001 a small patrol of Australian soldiers from Alpha Company 4RAR also came under attack from a militia group believed to be Indonesian Special Forces, Kopassus, operating close to Balibo. The film TIMOR TOUR OF DUTY revolves around two ex-Australian soldiers who were on that patrol.

In 1998, a year before East Timor erupted, the far-sighted Chief of the Australian Army, Lieutenant General Frank Hickling, a combat engineer who saw action in Vietnam, went from unit to unit ordering his senior commanders that he wanted all full time and reserve soldiers to sharpen up their war fighting skills.

He was concerned that the army's combat troops had gone soft because of the focus on peacekeeping missions. It was his foresight that kept Australian soldiers, both regular and reservist, alive on the battlefield in Timor despite the cutbacks from the bureaucrats.

The brutal murder and later mutilation of New Zealand soldier Private Leonard Manning by militia in July 2000 was a signal of what the militia had in store for Australian and international soldiers.

"They wanted to send a message loud and clear to Canberra and Wellington, get out of Timor," Uzunov said.