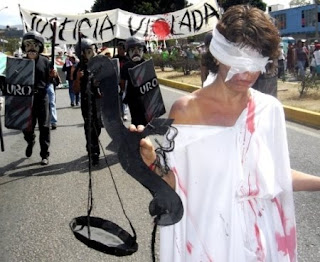 ETLJB Ed: Only 10 years! Not long enough to bring the amnesty law into force? Too much constriction on President Horta's discretion to grant arbitrary amnesties without reference to criteria and standards entrenched in the law looks like a more plausible explanation.

ETLJB Ed: Totally misunderstanding the concept of the separation of powers, or, knowing but wilfully disregarding them, the East Timor National Parliament embarks upon an unconstitional and undemocratic course of action that would be unthinkable anywhere but in the confused and unstable political structure of the post-independence Timorese state.

ETLJB Ed: Recalling that the Prosecutor-General is former Fretilin power monger, Ana Pessoa, it will be interesting to see whether she decides to prosecute her old political enemies who some say have acted in violation of the Constitution and international law by releasing crimes against humanity suspect Marternus Bere.

The chief justice Claudio Ximenes has issued public statements threatening application of the criminal law if state officials acted illegally in releasing Bere. The problem with a judge making such public statements is that it is further evidence of the complete contempt for the principles of the rule of law and the separation of powers which has been demonstrated repeatedly by the Parliament, the Government, the President and the Chief Justice.

What possible hope does East Timor of resolving economic and social problems and achieving sustainable development while the rule of law and democratic principles emerge only as the exception rather than the norm, one might ask?