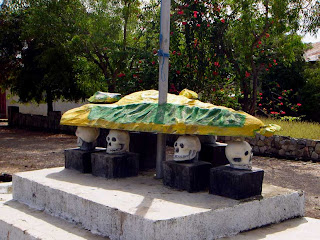 By Antonio Ramos Naikoli Editor of Forum Haksesuk Mari Alkatiri, participated in two successive transitional administrations under UNTAET. He never publicly advocated an international tribunal to judgecrimes committed in 1999, including the massacre at the Suai Church. The pragmatism of Mari Alkatiri, because of his lust for power, consists ofthe following: fight for power and economic monopoly.

Since the time ofUNTAET until the Constitutional Government, Mari Alkatiri assumed important portfolios, how to control the power and economy through areas related tooil. In terms of power, Mari Alkatiri had an absolute majority in parliament, had total leverage to promote the creation of an international tribunal. He hadall the executive power to move forward with programs for the training of national legal systems. After all, many cases are pending in court and the Public Ministry, which they identified as a cause of lack of sufficient and competent human resources.


Image added by ETLJB - A monument to the East Timorese independence struggle.