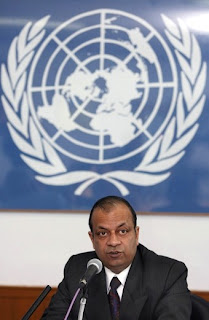 UN News Centre New York, Oct 23 2009 3:05PM ENVOY URGES CAUTION ON CUTS TO UN POLICE STRENGTH IN TIMOR-LESTE - Any drawdown of international security forces in Timor-Leste should proceed with caution, the top United Nations envoy to the South Pacific nation warned today ahead of UN and Government reviews of the world body’s peacekeeping presence in the fledgling country.

In his final address to the Security Council, the Secretary-General’s Special Representative Atul Khare said that President Jose Ramos-Horta and other leaders of Timor-Leste do not wish to be continually dependent on the deployment of UN police units in their country.

“I also believe that the long-term sustainability of Timor-Leste’s efforts depends on the ability of its own institutions to operate in a democratic, responsible and effective manner,” said Mr. Khare, who heads the UN Integrated Mission in Timor-Leste (UNMIT).

“At every step of the way, UNMIT and the UN country team have consciously endeavoured to work in a manner that enhances the capacity and credibility of the institutions of this young nation,” said Mr. Khare.

The Special Representative noted, however, that the success in supporting security forces instead of taking the lead in law enforcement means that progress depends on the rate of which local institutions develop, which can also include setbacks.

“The touchstone for success in Timor-Leste is not whether crises occur, but how future crises are met and resolved,” said Mr. Khare. “The goal should be to ensure that they are handled in a responsible manner that does not threaten the State, and instead provide an opportunity for enhanced social cohesion and development.”

He said that the future presence and role of the international security forces needs to be carefully taken into account in planning any modification of the composition and size of UNMIT.

“The United Nations and the Government of Timor-Leste should jointly agree on the criteria for each step in the process of downsizing the UNMIT police,” said Mr. Khare. “It should be clearly agreed with the authorities, in advance of each stage, what support the UN will and will not provide.”

The UN presence in Timor-Leste began in 1999 when it conducted a “popular consultation” which saw a huge turnout of Timorese overwhelmingly vote for independence over autonomy within Indonesia. The eventual result was the birth of the State, but 1,500 to 2,000 people were killed in clashes in the immediate aftermath of the declaration.

UNMIT received its mandate to restore public safety in the wake of an eruption of violence in 2006 ­ attributed to differences between eastern and western regions of the country ­ when 600 striking soldiers were fired, and the ensuing hostilities claimed dozens of lives and drove 155,000 people, or 15 per cent of the total population, from their homes.

In his most recent report on UNMIT earlier this month, Secretary-General Ban Ki-moon stressed that the causes underlying the 2006 crisis, including the rising level of poverty, persistent unemployment, the lack of an effective land and property regime, and under-strength justice and security sectors, could still destabilize the country.
at Saturday, October 24, 2009