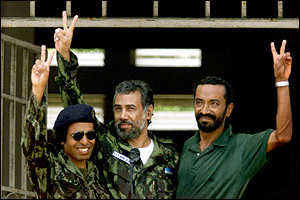 DEMOCRATIC REPUBLIC OF TIMOR-LESTE OFFICE OF THE PRIME MINISTER ADDRESS BY HIS EXCELLENCY THE PRIME MINISTER AND MINISTER OF DEFENCE AND SECURITY KAY RALA XANANA GUSMAO ON THE OCCASION OF THE OPENING OF THE SEMINAR 'MILITARY ENGINEERING ASSISTANCE TO NATIONAL PROJECTS, NATURAL DISASTERS AND POST-CONFLICT REBUILDING – THE SITUATION IN TIMOR-LESTE'

This first Seminar on military assistance to national projects, natural disasters and postconflict rebuilding in Timor-Leste could not be more timely, and reflects a commitment by the Government to provide an environment of security and stability through the hard work of State agencies, and with the assistance of our international partners.

Taking into account that one of the goals of this seminar is to understand the vital role of the Armed Forces in nation building and community development, I would like to highlight that the Armed Forces are one of the cornerstones of our State, and can in all fairness be considered the origin of the Timorese Fatherland.

In this period when we celebrate the 10th anniversary of our freedom, the Timorese citizens of today and of tomorrow should be eternally grateful to the men and women who served in FALINTIL during the Resistance. Without their sacrifice, we would not be standing here today.

We are aware of the problems that the F-FDTL has faced since the Timorese People, in a legitimate expression of those who enjoy self-determination, chose to continue having Armed Forces in the new Independent State. We still recall the difficulty we had in ensuring that our decision prevailed given all those who argued that having a defence force was unnecessary.

And now we live in a world of constant change. In the last few decades, we have seen new threats to world peace and stability, including the so-called ‘non-conventional’ threats, which can jeopardize even the Sovereignty of an independent State.

A clear example of this new reality is international terrorism, which can strike in any part of the world. No country can consider itself safe from this threat.

In addition to this, climate change is causing natural disasters, which endanger the safety and the very survival of populations.

Looking at recent events that have caused such suffering in our region we have examples of terrible natural disasters, including earthquakes in China and Indonesia, floods in Myanmar and fires in Australia.

Timor-Leste is also vulnerable to the occurrence of natural disasters, being susceptible to long periods of draught, cyclones, earthquakes, floods and tsunamis. To make matters worse, we lack effective technological warning systems to alert us to potential disasters. And while so far we have been fortunate not to have experienced such a disaster, this also means that we do not have experience in managing such events.

In view of the reality of the threats we now face, we must consider new roles for the Armed Forces. To respond to this challenge, we established the 2020 Task Force under the Secretariat of State for Defence.

Any initiative that can contribute to the thinking and dialogue in this area is of course welcome. Hence the importance of this seminar, as it discusses the possibility of using the Armed Forces in areas that go well beyond the territorial defence of the Nation in the strict sense of the term.

The doctrines for the protection of National Sovereignty are being recast by many countries, as the forefront of military thinking moves towards an increasing understanding of the relationship between national defence and internal security. As the line between them blurs, activities must now be carried out in a complementary manner, and one activity cannot be unrelated to another.

Recently, Timor-Leste experienced events that proved the effectiveness of applying these new doctrines: the joint operation of the F-FDTL and the PNTL in responding to the attacks that took place in February 2008.

Having separate but concerted missions, both Institutions achieved the common goal of restoring institutional order and ensuring the basic safety and security of the population. It is likely that had they acted alone, they would have been unable to achieve the same results with such success.

The learning from that operation helped inform the drafting of a new National Security Law. And as well as this Law, and importantly, we have also revised the Internal Security Law and drafted the National Defence Law.

We are creating a National Security Integrated System that is currently taking its first steps and that encompasses and defines the role of all entities with responsibilities in the sector of security.

The National Security Integrated System is based on a foundation consisting of Defence, Internal Security and Civil Protection. In order to successfully respond to any threats that may jeopardize the daily existence of Timorese society, it is imperative that the Armed Forces, the Police and Civil Protection cooperate effectively towards the same goal: to ensure the independence and sovereignty of the State, the unity and integrity of the national territory and the freedom and safety of the People.

Therefore, the F-FDTL must be prepared to perform their new mission as mandated in the National Security Law, including those roles that assist populations when they are affected by disasters or public calamities.

Military assistance to humanitarian aid and emergency management is becoming increasingly important and requires active coordination and collaboration with other State authorities, such as the police and civil protection, as well as entities responsible for transportation, infrastructure, health services and social assistance.

In addition to this, involvement by non-governmental bodies and support by development partners, with their important expertise, is essential in this learning process so that we may improve our skills, our organisation and our coordination mechanisms.

The use of Military Engineering is completely innovative to our Defence Forces, and something that we must explore. The F-FDTL can, and should, play a critical role in an area as important as the construction or reconstruction of infrastructure that is indispensable to the economic development of the Country, and consequently to the living conditions of our People.

I trust that this seminar will help to define the matters in which the Armed Forces, and particularly Military Engineering, may be used in civil protection and humanitarian assistance missions.

Let us all work together so that Military Engineering may soon be a reality, instead of a simple mirage.

Thank you very much.