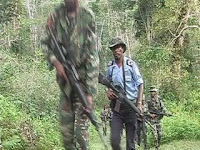 Antonio Lima Lima on patrol with F-FDTL in Operation Halibur 2008 after the attacks on President and Prime Minster. Funny thing is that Antonio 55 is neither a PNTL officer not an F-FDTL soldier.

He does however have some fame circa 2006 as described by the UN Inquiry Commission.http://unmit.unmissions.org/LinkClick.aspx?fileticket=sBQns2vB4mk%3D&tabid=431

Also on 8 May 2006 Minister of the Interior Lobato ordered the Commander of UPF, Antonio da Cruz, to deliver 15 HK33 semi-automatic assault rifles to his residence. These weapons were among the 180 HK33 firearms distributed legally to UPF.

Eastern members of UPF had been disarmed by Commander da Cruz to make these weapons available. The Minister of the Interior arranged separately for PNTL ammunition to be delivered. He used the weapons to arm two distinct groups of civilians. The first was a group of 31 civilians under the command of Rai Los.

The second was a group known as Lima Lima (55) under the command of Antonio Lurdes, aka Antonio 55. The Minister of the Interior told Commander da Cruz to give 10 of the rifles, 6,000 rounds of ammunition and 10 magazines to Rai Los in Liquiça. At about 10 p.m. that night Rai Los met Commander da Cruz in a cemetery to receive the weapons.

During the same evening the Chief of Staff of the Minister of the Interior travelled to Ermera and gave the remaining five HK33 rifles and one crate of ammunition to Antonio 55. The Lima Lima group was told to await further instructions. At about 9 p.m. on 21 May Commander da Cruz and Rai Los met at a deserted location, this time near Maubara. On the instructions of the Minister of the Interior, Rai Los received a further eight HK33 weapons and 16 magazines.

it depends on the nature of circumstances. Broadly speaking , The state has a power to appoint anyone who has ability or deemed necessary to contribute to national security. Therefore Antonia lima was one of them.