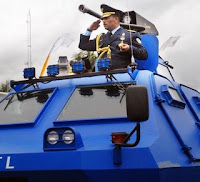 New PNTL Commander appointed - Commander Designate of the Timor-Leste National Police (PNTL) on Friday 27 March. Held at the Government Palace, the swearing in ceremony took place on the ninth anniversary of the formation of the PNTL.

On 27 March 2000, the first intake of police officers were accepted into the Police Academy, then known as the Police College in Dili. The ceremony was marked by an official parade by PNTL officers and speeches from President Jose Ramos Horta, Prime Minister Xanana Gusmao and the new General Commander Designate. Mr Monteiro took over from Mr. Afonoso de Jesus, the former Acting General Commander Designate.

PNTL Resumption of Responsibility begins The first step in the resumption of responsibilities by Policia Nacional de Timor-Leste (PNTL) was announced last Friday by Prime Minister Kay Rala Xanana Gusmao and the Special Representative of the Secretary-General of the United Nations (SRSG) Atul Khare. They announced that the resumption would begin in the District of Lautem, followed by Manatuto District. The timetable of resumption in these two districts will depend on the conclusion of an agreement between the Government of Timor-Leste and the United Nations Integrated Mission in Timor-Leste (UNMIT) concerning the resumption process and in compliance with the certification procedure. Practical arrangements for the resumption are currently being made in the two districts.

Assessments have also been completed in Aileu and Ainaro. However, these two districts were found to require improvements before they can be declared ready for resumption. Government and UNMIT experts are now assessing Oecussi and Manufahi. The remaining districts and PNTL special units will then be assessed. The Government of Timor-Leste and UNMIT have already agreed that the resumption will be a phased process based on a joint assessment on the PNTL preparedness in accordance with mutually agreed criteria. UN Police will remain in the districts where the PNTL has resumed responsibilities to provide advice and to monitor the PNTL, including in the area of human rights protection.

Prime Minister Gusmao congratulated the PNTL and welcomed the agreement. “We will start with two districts because this is a gradual process and in the future other districts will follow. Therefore we ask the state and the government to create conducive conditions, which means adequate facilities, logistics and each of the commands will be prepared to take on leadership responsibilities,” said the Prime Minister.

Transitional justice training in Covalima A training session for the Transitional Justice Project led by the Ministry of Justice began in Suai last week. The aim of the program is to work with potential community mediators on how to peacefully resolve conflict. Supported by the German Development Agency, GTZ, the two-month training will end on 7 May. The training will eventually work with three tiers of community leaders, Chefe de Aldeias, Chefe de Sukos and Sub-district Administrators. Chefe de Aldeias from Suai, Zumalai, Tilomar & Mauqatar are receiving the first level of training. This will be followed by training for Chefe de Aldeias from Fohorem, Fatululik & Fatumea. Once this round of training ends, training will be given to all Chefe de Sukos and Sub- District Administrators. The training focuses on strengthening the skills of the participants in conflict management, non-violent communication, mediation techniques along with an introduction to human rights theory and processes within the
law.
at Friday, April 10, 2009