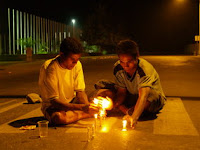 2 April 2009 Remembering the Santa Cruz massacre - A group of Australian forensic scientists may have solved one of East Timor's greatest mysteries.

A team from the Victorian Institute of Forensic Medicine has found the remains of 16 people in graves near the country's capital, Dili.

They suspect they are victims of the 1991 Santa Cruz massacre, where occupying Indonesian forces opened fire on a group of mourners in a cemetery. More than 100 people were reportedly killed, but no bodies have ever been found. Forensic anthropologist Soren Blau says there are strong indications the bodies are victims of the massacre.

"There is evidence of ballistic trauma - so gunshot wounds, and blunt force trauma."

She says scientists will spend the next four weeks trying to identify the remains through laboratory tests and witness statements.