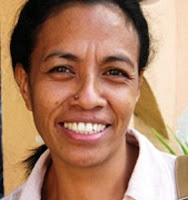 “Mr Gusmao’s own MPs from the Social Democratic Party, Democratic Party and CNRT party all agreed with FRETILIN’s call for the PM to dismiss Ms Lobato during yesterday’s parliamentary sittings. Everyone who spoke supported our call in the parliament,” Bano said.

“Mr Gusmao is now the only person protecting Ms Lobato. He has put his own credibility on the line by ignoring these serious allegations against her,” Bano said.

“The allegations were very precise and very grave. SMS texts indicated that Ms Lobato organized the purchase of uniforms and equipment for prison officers in her ministry, involving herself in every detail. This included the Indonesian business person with whom she was dealing providing her with prices and the bank account in Indonesia into which money should be deposited.

“Last week, on Monday 20 April 2009, Tempo Semanal published interviews with three people who alleged they were paid ten percent of the project value in return for conspiring with the minister and her husband to use a front company to buy the goods.”

Bano said FRETILIN would hold Mr Gusmao legally and politically responsible for any financial losses incurred by the government since he had refused to act on revelations of Ms Lobato’s dealings since last November.

Bano said that FRETILIN was gravely concerned that the work of Timor-Leste’s justice sector was under a cloud of mistrust and diminishing confidence while Ms Lobato remained in control of a key ministry responsible for the functioning of the courts, the prison system, the notary public, witness protection and land law reform, as well as business registration.