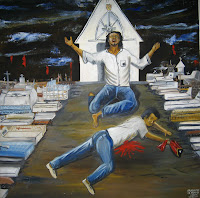 Justice Ministry produces law on prisoners Radio Televisaun Timor Leste 3 April 2009 - Minister for Justice, Lucia Lobato said her ministry was currently preparing a draft law to regulate attitude of prisoners who had been sentenced by the court.

Donors ready to support Timor-Leste's development: Guterres Timor Post 3 April 2009 - The meeting held by the Government and donors have come up with a positive result for the Timorese people and the Government as they pledged to continue providing funds to be allocated to various aspects in the country's development.

Assessment of UNPAZ is positive says President Horta Radio Televisaun Timor Leste 3 April 2009 - President Jose Ramos Horta said assessment to the University of Peace to get accreditation from the Government was positive, because its was found to be scientific and was objective.
-----
East Timor Law Journal - Towards the rule of law in Timor-Leste!
at Friday, April 03, 2009