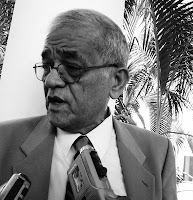 (Translation from tetun) Jornal Diario Nacional Dili, 20 April 2009 - Deputy Prime Minister Mario Carrascalao says that nearly all every ministry is in the red, or is affected by KKN. (Translator's note: "KKN" is the Indonesian acronym for “corruption, collusion and nepotism”)

“Nearly every ministry is in the red, though at differing levels. It is true that some are worse than others. Some ministers do not even know that it is going on, and I think in these ministries it involves lower level civil servants misapplying state assets, not doing the right thing with it,” added Deputy Prime Minister Mario Carrascalao to journalist some days ago, after having attended a meeting at the office the President of the Republic (PR), Jose Manuel Ramos-Horta at Farol, Dili, where he discussed this issue with him.

PR Horta said he does not want this nation’s name to be sullied in the international community. He said that when there is corruption, it is the poor who lose out because funds do not make their way down to them, but go to a small group who take it all.

“I want to see an investigation,” PR Horta affirmed. Despite this, PR Horta said that he is satisfied hearing that Deputy PM Carrascalao has already sent some cases to the PGR (Prosecutor General of the Republic) to continue with investigations and take cases to court.

“I am also happy with the PGR Ana Pessoa. I know cases will now not just sit and gather dust when they get to her but will be investigated,” PR Horta assured journalists. PR Horta also said that, as the Head of State, he had 100% confidence and fully supported Deputy PM Carrascalao as he delves into the biggest concern in the life of the nation.

“I am appealing to him as a Timorese who loves the nation, who also fought for 24 years for the independence and freedom of the country, that I do not want to see our nation’s name sullied in the eyes of other nations. I give full support to the Deputy PM Mario to oversee good governance, the fight against corruption and ensure our ministries become stronger,” PR Horta said in expectation.

Deputy PM Carrascalao said in response to this concern that from May onwards he would undertake routine annual inspections to all government ministries.

“Whenever I come across some criminal activity or misapplication of state funds, I will be handing it over to the inspector general to investigate and take to the PGR. There will not memo from me involved,” affirmed the former PSD MP in the National Parliament. (ends)

Now the government is too corrupt

the PM don't have choice because if he controll her minister.it'll probably her goverment should broke.

As we see and hear that many news in our country is talking about corruption,collusion and nepotism. Deputy Mr Mario carrascala have said to our pr Horta and we heard that AMP minister all in red or high level,so we just waiting for the decision which MR PR Horta cecide to them (AMP ministers).
that is incredible news about AMP ministers becuase in fretilin government we have never heard about CCN (corruption,collusion and nepotism).is this good wark in AMP ? of course no, just the basterd ministers can do that.
in my oppinion, the best decision which Mr HORTA is decide to the corrupter is throm them out of work........
it will make AMP minister free from the that cases.

Deal All, My privious comment was in tetum, but I do agree with all the comments above. However, I just want to clarify that previous goverment (Fretilin) also had corruption but not much as AMP government. In the AMP goverment it is incredible corruption, and also I do agree with vice PM statement that every ministry has KKN.But, the prolem is How to combat the KKN? the answer is depend on prime minister commitment and all the AMP. From UK.